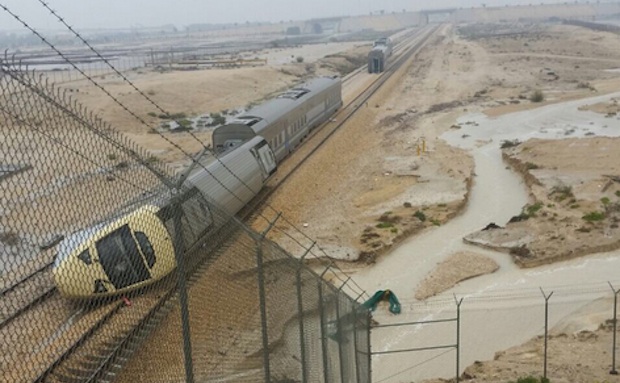 Rail operations in Saudi Arabia’s Eastern Province are hoped to resume on Friday after torrential rain damaged track and caused a train to derail last week.

The incident, which occurred near Dammam at about 1am on Friday, injured 18 and resulted in the transfer of 193 passengers and six crew members to another train.

Read: Floods cause train to derail near Saudi’s Dammam, injuring 18

The Saud Railways Organisation has suspended passenger services, except trains departing from Riyadh to Hofuf and Hofuf to Riyadh, until at least February 23.

Saudi Gazette cited a Saudi Railways spokesperson as saying work to repair the damaged track was being hampered by swamp-like conditions but the company hoped to repair the tracks and have a trial run on Thursday.

“We are not going to take any chance. Once we are fully satisfied with the repair and longevity of the track only then services will resume,” he was quoted as saying.

The publication reported that the suspension of the service meant millions of riyals of goods, including perishable items, were delayed at Dammam’s King AbdulAziz Seaport waiting to be transferred to Riyadh dry port.

This resulted in congestion at port terminals and the publication said many companies were deploying trucks and trailers to transport goods to Riyadh.

Elsewhere, the heavy rains are said to have destroyed 70 per cent of crops in Dammam, with some farmers said to have lost SAR150,000 worth of goods.

Automobile repair hub the Thuqba Industrial area is also said to be waterlogged with many workshops closed and several major flyovers and underpasses have been damaged.

Saudi Gazette said schools and colleges in the area resumed their normal schedules today and dryer conditions are forecast until the weekend.