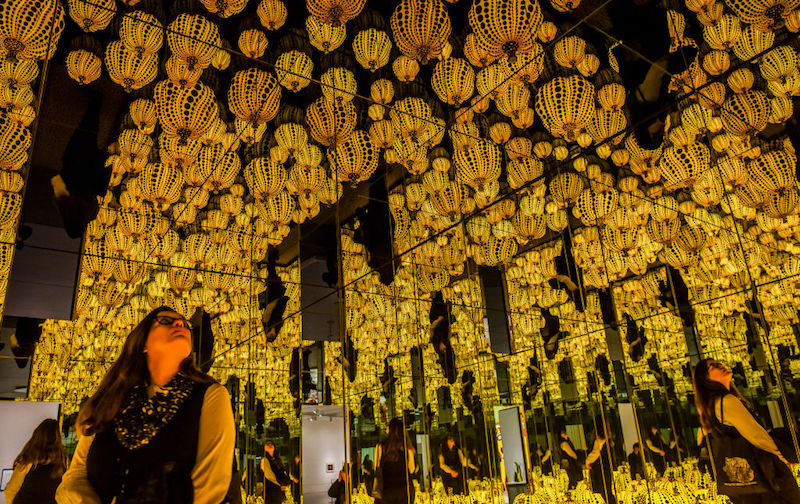 Ever since a Saudi prince paid $450m for a Da Vinci painting two years ago, the art world has been trying to figure out what else will end up in the desert kingdom.

One answer is now on display at a Miami museum, which lists the Collection of the Royal Commission for Al-Ula as the lender of a work by the global art phenom Yayoi Kusama.

Kusama’s immersive work, “All the Eternal Love I Have for the Pumpkins,” is on view at the Institute of Contemporary Art from Oct. 12 through Jan. 31, according to the museum’s website. The 2016 installation includes a “mesmerising array of Kusama’s signature spotted pumpkins within a mirror-lined room illuminated with LED lighting.”

The Saudis bought the Kusama about six months ago, according to a person with knowledge of the matter, who declined to be named because it’s private.

“We are pleased to bring a work that has been popular with museum audiences around the world to our Miami community for the first time,” Tommy Pace, the museum’s deputy director, said in a statement. The museum notes that the exhibition is supported by the Inigo Philbrick Gallery.

The problem is that somebody else says they own it. German art investment firm Fine Art Partners sued Philbrick and his gallery last month alleging breach of contract and seeking the return of $14m of art he purchased on its behalf, including the pumpkin room.

Philbrick and the firm were partners in buying, marketing and selling art from at least 2015, according to the suit, which was filed last month in state court in Miami-Dade County and reported by Artnews. Fine Art Partners bought the Kusama for $3.3m in 2017 through Philbrick, who was authorised to store, market and resell the work for the target price of $5m; it was picked up from Phillips auction house in New York and insured by Philbrick for $4.6m, according to court filings.

And that’s where the Saudis come into the picture.

An agreement with the Institute of Contemporary Art, dated Sept. 11, states that the Kusama is on loan to the museum from an entity called MVCA in Riyadh, Saudi Arabia, and lists Collection of the Royal Commission for Al-Ula as the lender’s name for labels and publications.

The commission is a Saudi government entity that oversees development in Al-Ula, an archaeologically rich region in the northwest. Turning the kingdom into a cultural destination is part of a high-profile agenda outlined by Crown Prince Mohammed bin Salman.

It’s unclear whether Fine Art Partners was aware of the sale of the Kusama to the Saudis. An email Philbrick sent to Daniel Tumpel, a principal of the firm, the same day as the loan agreement didn’t mention the sale, according to court papers.

Neither Philbrick nor his lawyers returned calls and emails seeking comment on the dispute. Tumpel declined to comment. An email seeking comment from the Royal Commission for Al-Ula wasn’t immediately returned.

“The installation will remain on view as planned through January 31, 2020,” the museum’s Pace said in a statement. “The work is on loan to the museum from a private collection. We were not aware of the dispute when the exhibition was planned, but it appears to be an issue between the previous owners.”

What Philbrick’s email does address, at some length, is a remarkably frank set of plans to use a museum exhibit for a marketing blitz. Philbrick describes “a national PR campaign, which should bring us into contact with a number of potential buyers.” He says “to further this cause I have donated a meaningful amount of money to underwrite PR, advertising and promotion. The display is going to be a sensation in this city, and a major stopping off-point during Art Basel.”

He assures Tumpel that “it will be impossible to have a higher profile campaign behind a work which is available on the secondary market” for sale.

As for the exhibit itself, the museum’s website says it’s the first time one of Kusama’s “infinity mirror rooms” is on view in Miami. Visitors will have to pay $15 for a timed ticket to contemplate the myriad of pumpkins for about a minute.