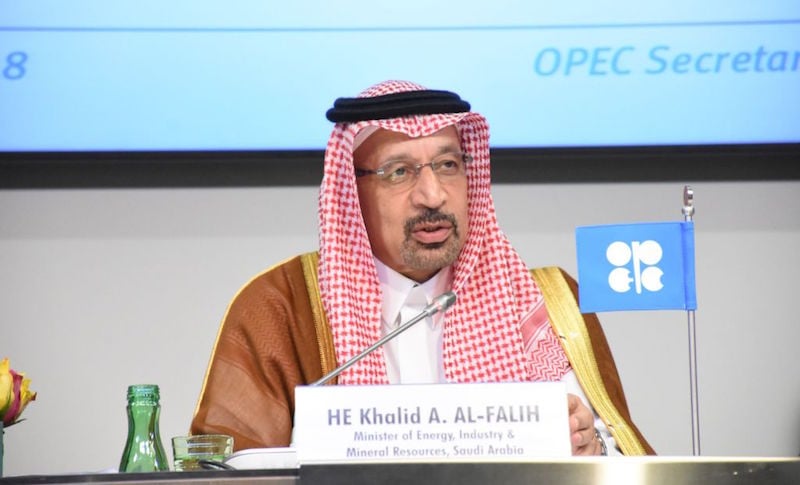 Saudi Energy Minister Khalid al-Falih said on Wednesday his country would not cut oil output on its own to stabilise the market, as OPEC peer Nigeria said it was too early to signal whether it would take part in any production curbs.

Oil producer group OPEC and its allies led by Russia meet in Vienna next week amid concerns over a slowing global economy and rising oil supplies from the United States, which is not involved in an existing agreement to restrain output.

However, Riyadh has come under renewed pressure from U.S. President Donald Trump, who asked the kingdom to refrain from output reductions and help lower oil prices further.

Possibly complicating further any Saudi decision on oil output is the crisis around the killing of journalist Jamal Khashoggi at Riyadh’s consulate in Istanbul last month. Trump has backed Saudi Crown Prince Mohammed bin Salman despite calls from many U.S. politicians to impose stiff sanctions on Riyadh.

Falih was in Abuja to meet his Nigerian counterpart Emmanuel Ibe Kachikwu. The Saudi minister said signals from OPEC members Iraq, Nigeria and Libya were positive ahead of the group’s Dec. 6 talks as all ministers wanted to restore stability to oil markets.

Russian President Vladimir Putin will meet Prince Mohammed in Argentina over the weekend at a G20 summit, which Trump will also attend.

“We are going to … do whatever is necessary, but only if we act together as a group of 25,” Falih told reporters, referring to OPEC and its allies led by Russia.

Moscow has so far resisted joining any new output cuts and Falih did not say whether he had heard of any change in Russia’s position.

“Everybody is longing (to) reach a decision that brings stability back to the market … I think people know that leaving the market to its own devices with no clarity and no collective decision to balance the market is not helping.”

Kachikwu told reporters it was too early to say whether Nigeria would participate in any cuts but added that there was “absolute resolve” within the Organization of the Petroleum Exporting Countries to stabilise the market.

Falih said earlier in November that abundant supply of oil may require OPEC and its allies to reduce output in 2019.

He said at the time that supply may exceed demand by as much as 1 million barrels per day, or 1 per cent of global demand, suggesting OPEC and its allies may try to reduce production by that number.

Asked on Wednesday whether cuts could be deeper than 1.4 million bpd, Falih declined to answer.

Nigeria has been excluded from the previous round of cuts, which began in 2017, due to steep production declines caused by unrest. The country’s output has recovered since then.