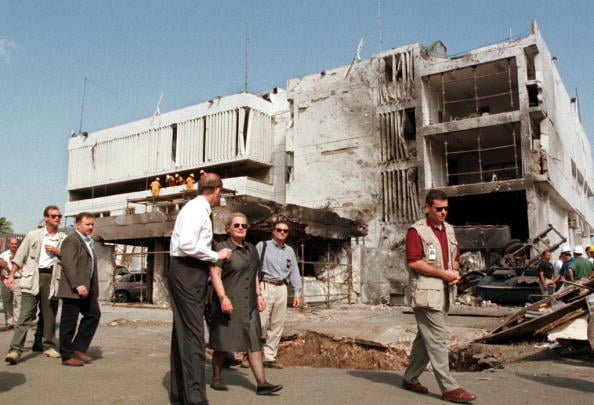 A Saudi man whom U.S. authorities described as a top Osama bin Laden deputy was sentenced to life in prison on Friday in connection with the deadly 1998 bombings of U.S. embassies in Kenya and Tanzania.

Khalid al-Fawwaz was sentenced by U.S. District Judge Lewis Kaplan after being convicted of four conspiracy counts in New York in February.

He was not charged with helping to plan the attacks, which killed 224 and injured more than 4,000. Instead, prosecutors said he was bin Laden’s “bridge to the West” in London, disseminating the al Qaeda leader’s violent messages to media outlets and sending supplies to the group’s members in Africa.

U.S. authorities also accused al-Fawwaz of running an al Qaeda training camp in Afghanistan in the 1990s and helping to establish a cell in the Kenyan capital of Nairobi that later conducted surveillance ahead of the embassy bombing there.

Several victims and relatives on Friday urged Kaplan to impose a life sentence.

“I worship the same God you say you do,” said Ellen Karas, an embassy worker left permanently blind by the August 7, 1998, bombing in Nairobi. “But my God is not a vengeful and angry God. My God is full of love.”

Edith Bartley, whose father and brother died in the Nairobi blast, said the attacks had caused her “unbearable pain and sorrow.”

“Mr. Al-Fawwaz, you are a travesty to the human race,” she said.

Before the sentence was imposed, al-Fawwaz turned and addressed the victims, saying words could not express his sadness at the “tragic violence that occurred.”

“I do not support violence,” he continued. “I never intended for any of my activities to contribute to it.”

His statement echoed the defense his lawyers presented at trial, portraying him as a peaceful dissident who shared with bin Laden a desire for reform in their native Saudi Arabia but turned away as bin Laden grew increasingly radicalised.

“My goal was reform, not rebellion,” al-Fawwaz said on Friday.

In a statement, Manhattan U.S. Attorney Preet Bharara said, “Fawwaz conspired with a murderous regime, and the result was a horrific toll of terror and death.”

Al-Fawwaz was arrested in London in 1998 and extradited in 2012 following a legal battle. He is the 10th defendant convicted in connection with the bombings, according to prosecutors.