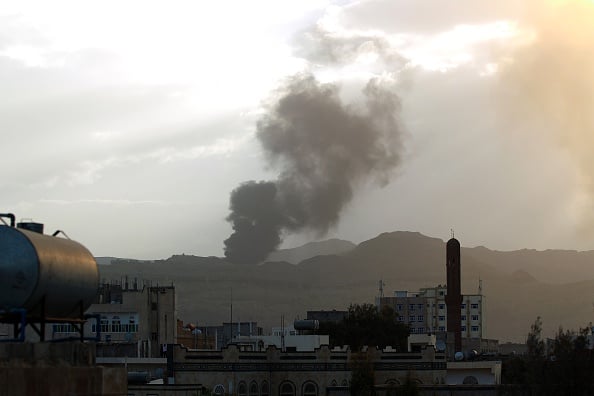 Air strikes by a Saudi-led coalition on Saada city in Yemen, where many civilians are trapped, are in breach of international law, despite calls for civilians to leave the area, the U.N. Humanitarian Coordinator for Yemen said on Saturday.

“The indiscriminate bombing of populated areas, with or without prior warning, is in contravention of international humanitarian law (IHL),” Johannes van der Klaauw said in a statement.

“Issuing warnings of impeding attacks does not absolve the parties of their IHL obligations to protect civilians from harm.”

Scores of civilians were reportedly killed and thousands forced to flee their homes after the coalition, which includes Saudi Arabia and nine other Arab countries and is backed by the United States, Britain and France, declared the entire governorate a military target, he said.

“Many civilians are effectively trapped in Saada as they are unable to access transport because of the fuel shortage. The targeting of an entire governorate will put countless civilians at risk,” Van der Klaauw said.

Under international law, all parties to the conflict must avoid inflicting harm upon civilians, and Van der Klaauw said military personnel and assets must not be located in densely populated areas, which would endanger civilians.

“In particular, all parties must avoid using populated areas as launching grounds for attacks,” he said.

In a separate statement, the U.N. humanitarian agency OCHA said the air strikes had hit several areas in Saada, including the government compound and al-Majbalah market.

Air strikes, shelling and heavy clashes also took place in another eight districts on May 9, and air strikes were continuing in Amran and Hajjah governorates, OCHA said.

Most were staying in public buildings such as schools, universities and government facilities, or with relatives.