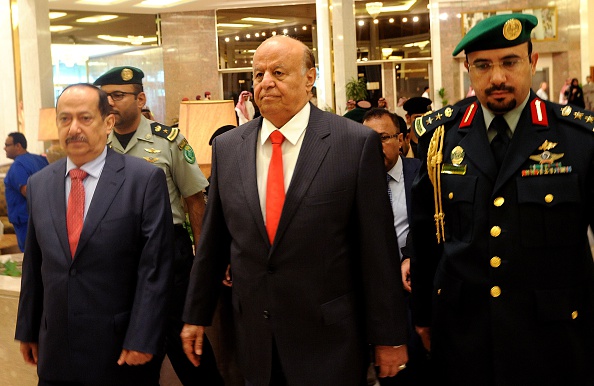 The Saudi led-coalition fighting to reinstate Yemen’s exiled government aims first to set it up in the mostly recaptured port city of Aden and then return it to Sanaa if possible via peace talks with Houthi foes, a coalition spokesman said last week.

But if the Iranian-allied Houthis did not eventually agree to quit Sanaa, the government would have the right to “get them out” by force, Brigadier General Ahmed Asseri said in an interview.

A Saudi-led Arab coalition allied with southern Yemeni secessionist fighters retook much of Aden last week in the first significant ground victory of their campaign to end Houthi militia control over much of the Arabian Peninsula country and restore the exiled president, Abd-Rabbu Mansour Hadi.

Yemeni forces backed up by Saudi-led air strikes have recaptured positions on Aden’s outskirts used by Houthis to fire rockets into the city, local officials said on Thursday.

Senior members of Yemen’s exiled administration flew into Aden on July 16 to make preparations for the government’s return to the major southern port, four months after it was pushed out by Houthi forces, the dominant armed faction in the conflict.

Asseri, whose side has been conducting air raids on Houthis since March 26, said the first task was to secure Aden so the government could operate from there for the moment.

“Aden was the first step. Now the government will start rebuilding their military capability, their security capability, the stability in cities,” he said, and this would need time.

“We believe that going surely, step by step, if the Houthis get out of Sanaa through peace talks, then this is important.

“But if they keep controlling (Sanaa), I think the legitimate government has the right to get them out of Sanaa.”

Sanaa is in northern Yemen and has been frequently bombed by Saudi-led warplanes over the past four months.

Asseri said the Houthis ought to implement U.N. Security Council Resolution 2216, which calls for the Zaydi Shi’ite movement to withdraw from cities under their control, return seized arms and allow Hadi to return from his Riyadh exile.

The Houthis have rejected that resolution, arguing they are pursuing a revolution against a corrupt government and Sunni Islamist militants, and they deny having any military or economic links to Shi’ite Iran, the Saudis’ main regional foe.

Asseri said the coalition welcomed investigators to Yemen to look into rights abuses by any side in the four-month-old war.

“I assure you the coalition is very ready to cooperate with any investigation in Yemen,” he said, noting that it would be up to the Yemeni government to grant access to the country.

But he said a Human Rights Watch accusation that coalition warplanes bombed civilians on July 24 in a possible war crime was biased, and that HRW had not sought coalition comment.

An HRW researcher acknowledged to Reuters that no such response had been sought but he said a request for comment on a previous similar investigation had received no reply.

“There is no question that this was an air strike,” said the researcher, Ole Solvang.

Human Rights Watch has accused both sides of abuses, most recently the coalition over the July 24 raid in western Yemen and pro-Houthi forces of firing rockets indiscriminately into residential areas in Aden.

“We believe the report was designed to accuse the coalition without seeing what the others do and without hearing our view,” Asseri said, adding Houthi rocket fire was to blame. He noted HRW’s report had urged an investigation into the attack, while blaming the coalition. He described this as illogical.