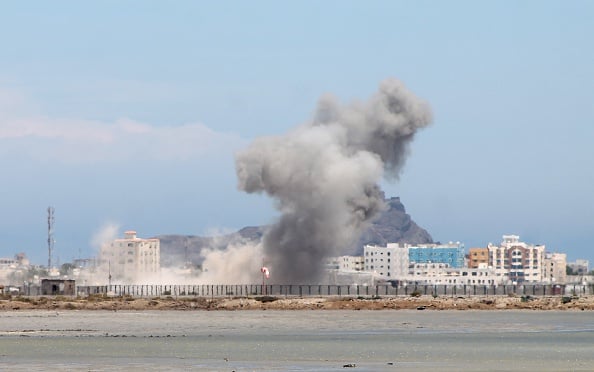 Air strikes by Saudi-led forces hit Houthi rebel positions in and around the southern Yemeni city of Aden overnight, residents said, after a five-day humanitarian truce expired on Sunday.

Yemen’s foreign minister told Reuters the Saudi-led coalition had decided not to renew the truce because the agreement had been repeatedly broken by the Houthis. The rebels were not immediately available for comment.

“That’s what we said before — that if they start again, we will start again,” said Reyad Yassin Abdullah from Yemen’s exiled government in Riyadh. The coalition was not considering any new ceasefire, he added.

Bombings struck the rebel-held presidential palace in Aden, groups of militiamen on the western and eastern approaches to the city as well as the international airport where Houthis and local fighters have been clashing, said residents.

There was no word on any casualties.

Saudi Arabia and its Sunni Muslim allies have been conducting an offensive against the Houthis and units loyal to former president Ali Abdullah Saleh for more than six weeks, saying the rebels are backed by Shi’ite Muslim power Iran.

The campaign has yet to reverse the Houthis’ advance into Aden and along battlefronts across Yemen’s south.

A five-day truce that started on Tuesday night halted the air strikes and allowed humanitarian aid into the blockaded country, though residents of the remote southern provinces of Shabwa, Dhalea and Abyan said heavy ground fighting persisted despite the agreed pause.

U.S. Secretary of State John Kerry said on Monday that Washington supported extending the truce, but that manoeuvres by the Houthis made that difficult.

“We know that the Houthis were engaged in moving some missile-launching capacity to the border (with Saudi Arabia) and, under the rules of engagement, it was always understood that if there were proactive moves by one side or another, then that would be in violation of the ceasefire arrangement,” he said.

Iran’s foreign minister on Monday called on the United Nations to take on a more active role in Yemen, including establishing a presence on the ground to ensure that humanitarian aid could be distributed.

“We believe the U.N. needs to create a protected zone in Yemen to receive humanitarian aid… it is time for the U.N. to take control of the situation,” Mohammed Javad Zarif said through an interpreter in a televised news conference.

The United Nations special envoy to Yemen Isamil Ould Cheikh Ahmed had called on Sunday for the five-day ceasefire to be extended.

“The strikes will only be against the Houthi rebels, very specific, when they move their missiles or when they start attacking people,” he added.