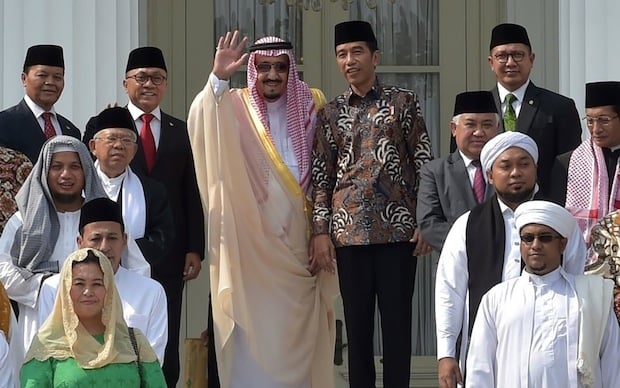 Saudi Arabia’s King Salman has embraced the “selfie”, taking part in a number of light-hearted self-shot pictures and videos during his tour of Asia that contrast with the pomp and formality of most of the octogenarian monarch’s trips abroad.

In the first days of a lengthy regional tour, the king has appeared with top-ranking officials in Indonesia and Malaysia in pictures and clips that have been shared online millions of times.

Indonesian President Joko Widodo shared on Facebook a video of himself dining with the king at the presidential palace in Bogor, near the capital Jakarta.

In the video, both men comment on the visit, the first to Indonesia by a Saudi king in nearly five decades, and give viewers a rare peek into a state event.

As Widodo holds what appears to be a phone camera, the king is seen dining on soup and using gold-coloured cutlery before commenting in Arabic on his 12-day visit to Indonesia, the longest leg of his month-long tour of Asia.

“I’m very happy to be here in Indonesia and with the Indonesian people,” King Salman says to the camera, as an interpreter sitting behind him translates into Bahasa Indonesia.

The king was also photographed posing for a selfie with former president Megawati Sukarnoputri and her daughter Puan Maharani, who is a member of Widodo’s cabinet.

Indonesia has a high concentration of Facebook and Twitter users, and selfies are a mainstay of social media in the world’s fourth most populous country.

Earlier this week, Salman was seen in a selfie posted on Twitter with Prime Minister Najib Razak of Malaysia, during the first stop on his sweep across Asia.

Though rare, Salman has made occasional appearances on social media before, including when he posed last year for a selfie in Qatar with a teen who survived cancer.

The king is travelling with an entourage of several hundred people and nearly 500 tonnes of luggage, including two gold-coloured escalators.

After Jakarta, the delegation is set to take a break in the resort island of Bali, where up to four hotels and 300 luxury cars have been booked for more than a week, according to local police and a tour agency association.

Salman is also set to visit Brunei, China, Japan, the Maldives and Jordan.