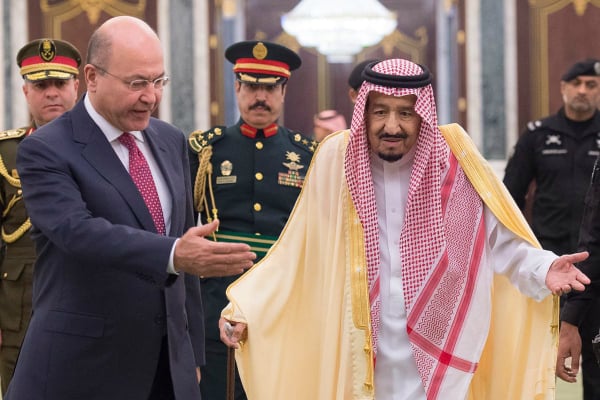 Saudi Arabia’s King Salman met with Iraqi President Barham Saleh at Al-Yamamah palace on Sunday as the kingdom seeks to counter Iranian influence in its neighbour.

Relations between Saudi Arabia and Iraq have warmed over the last 18 months with the resumption of direct flights and plans to reopen a land crossing between the two countries.

The two leaders discussed “ways of enhancing bilateral relations in various fields” and regional developments, according to Saudi Press Agency.

Saleh, who was pictured attending a luncheon held in his honour, is understood to have been invited for an overnight visit by King Salman.

National airline Saudia resumed flights to Baghdad in October last year after a 27-year suspension in the route.

Prior to this, there were no flights between the two countries since former Iraqi President Saddam Hussein’s 1990 invasion of neighbouring Kuwait.

Ties have continued to improve between the two countries in recent months.

It was also reported in July that Saudi offered to build a huge solar power plant and sell the electricity to Iraq at a steep discount to power rates offered by regional rival Iran.

However, Iraq has shown little sign of reducing ties with Saudi Arabia’s rival either.

As a sign of the regional struggle for influence, Saleh also visited Iran over the weekend and met with supreme leader Ayatollah Ali Khamenei and President Hassan Rouhani.

Following the meeting, Rouhani said on Saturday that the country could raise its annual bilateral trade with Iraq to $20bn from the current $12bn.

Baghdad is seeking US approval to import Iranian gas for its power stations and imports a large number of other goods from the country including food, agricultural products, home appliances, air conditioners and car parts, according to Reuters.

Iranian imports to Iraq reached $6bn in the year ending March 2018, accounting from about 15 per cent of total imports.