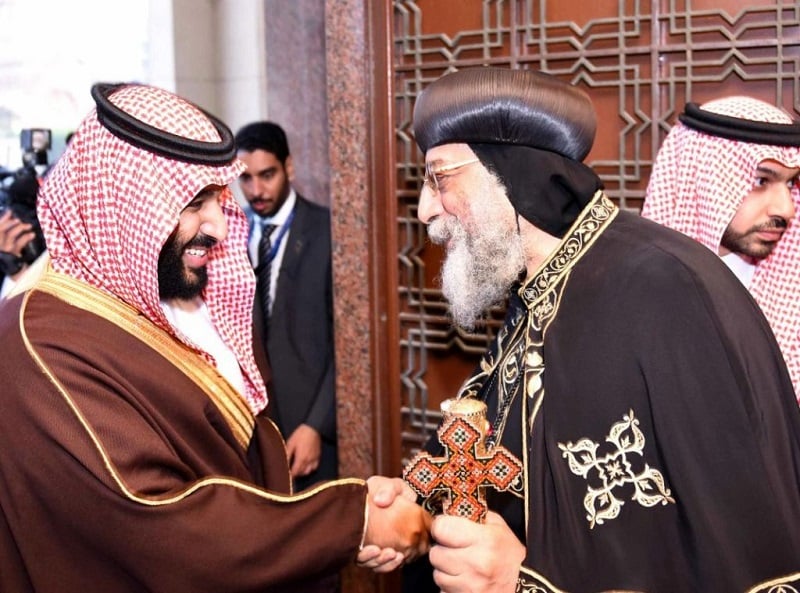 The visit was part of a three-day stay in Egypt for Prince Mohammed, his first public trip abroad since he became heir apparent last year. He will head for Britain and the United States later this month.

Cairo and Riyadh have strengthened ties in recent years and Egypt has received billions of dollars in aid from its rich Gulf Arab ally. The two countries on Sunday set up a $10bn joint fund to develop a planned mega-city.

The Gulf Arab kingdom is trying to shed its reputation as a global exporter of an ultra-conservative brand of Islam which critics say has inspired Islamist militants worldwide. Promoting a more moderate form of Islam is one of the more ambitious promises made by Prince Mohammed under plans to transform Saudi and reduce its reliance on oil.

Egypt has suffered from Islamist extremist violence in recent years, including attacks on churches often claimed by the ultra-violent Islamic State group. A bombing next to St Mark’s cathedral killed at least 25 people in December 2016.

Prince Mohammed’s visit comes as his close ally President Abdel Fattah al-Sisi prepares to run in an election he is virtually guaranteed to win.

Alongside posters urging people to vote for Sisi, large banners were put up in central Cairo on Monday with images of the Egyptian president, Prince Mohammed and Saudi King Salman bin Abdulaziz. “Welcome to your second country,” said one; another read “Saudi and Egypt are one hand, one nation.”

Egypt has sided with Saudi Arabia on a number of foreign policy issues, including a diplomatic and trade boycott of tiny gas-rich Qatar, and the support of forces battling Iranian-backed Houthi militants in Yemen.