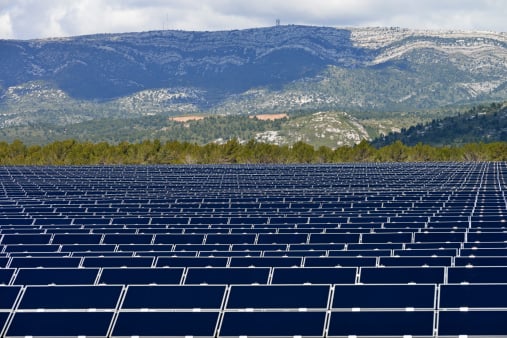 Saudi Arabia-based power and water project developer ACWA Power is seeking to secure or arranging finance for $15 billion worth of projects, nearly half of which are in renewable energy, its chief executive said.

The company, which plans to list its shares on the Saudi stock market, has projects operating or under construction in countries including Saudi Arabia, Jordan, Oman, Turkey, Morocco and some African and southeast Asian states.

“This network of countries is starting to move towards renewables fast,” Paddy Padmanathan said in an interview at the Reuters Middle East Investment Summit.

“Morocco is clearly leading, while South Africa is embracing a huge programme and is deploying it…Jordan is starting to employ renewables.”

ACWA Power’s plans illustrate a huge business opportunity emerging in the Middle East and North Africa: solar and wind power projects. Countries with big external deficits such as Morocco are pushing them to cut their energy import bills.

Meanwhile, some of the Gulf oil exporters are beginning to turn to them to meet rapidly rising domestic demand for electricity, since oil-fired power stations threaten to eat up a growing share of their oil available for export.

Padmanathan said ACWA Power’s bids under preparation or already submitted, plus projects which had been awarded but were still in the financing stage, totalled $15 billion. Of this, $7.4 billion were in renewable energy.

The company also has $20 billion worth of projects already operating while $4.5 billion are under construction.

In Saudi Arabia, ACWA Power is bidding for a 100 megawatt solar power plant in Mecca and has proposed the lowest electricity tariff, though an award has not yet been made, Padmanathan said.

In 2012 the Kingdom, which is the world’s largest oil exporter, announced plans to diversify its energy mix by investing in renewable energy. Little progress has been made so far, but projects such as the Mecca plant may indicate momentum is building.

“There will be renewable energy deployed, no question…I am confident that we will start to see plants starting to be built in 2015, maybe towards the end of 2015.”

He added that the government had decided in principle that no more new oil would be made available for power generation in Saudi Arabia.

Another Gulf country pushing renewables is Oman, which has much more limited oil reserves than its wealthy neighbours and is keen to conserve them. This month Oman announced plans to build what it described as the first major wind farm in the six-nation Gulf Cooperation Council, at a cost of $125 million.

Padmanathan said these targets could be achieved merely by operating in the company’s current markets.

“In terms of our future plans, in terms of geography we don’t see any reason for us to step much beyond that…This geography will keep us very much occupied for the next three to five years, simply because our demand is growing across this geography at about seven or eight per cent.”

The next independent power project in Saudi Arabia will be the Fadhili gas-fired power plant owned by Saudi Aramco and Saudi Electricity Co. Padmanathan said his company was waiting for a request for proposals, and would start working on a bid this year.

The company is also preparing to bid for an 850 MW wind project in Morocco, which it says will be the largest in the world.

In Oman, it bid for a desalinated water project in Qurayyat, which is now under evaluation and expected to begin construction next year. It is preparing to bid with Japan’s Mitsui for Oman’s Salalah II power plant.

ACWA has chosen Banque Saudi Fransi to arrange its flotation on the kingdom’s stock exchange. Padmanathan declined to say when the company aimed to list its shares; he said it currently had enough resources to finance its projects, but would look in the future to tap debt markets, including the Islamic bond market.