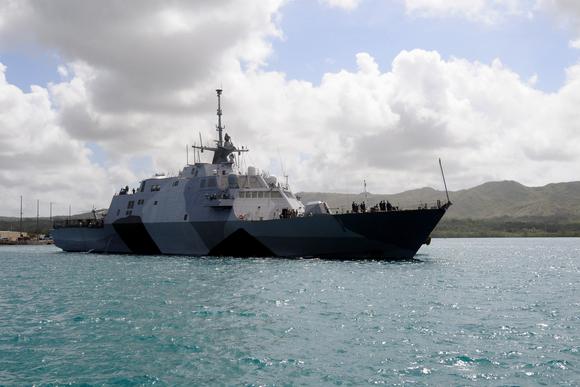 Saudi Arabia is in advanced discussions with the U.S. government about buying two frigates based on a coastal warship that Lockheed Martin Corp is building for the U.S. Navy, and could reach agreement by the end of the year, according to sources familiar with the talks.

The frigate sale, valued at well over $1bn, will be the cornerstone of a long-delayed multibillion dollar modernisation of the Royal Saudi Navy’s Gulf-patroling eastern fleet of aging U.S. warships and would include smaller patrol boats. It underscores the strong business and military ties between the two countries, despite tensions over the U.S.-led Iran nuclear deal.

Paperwork for the Saudi deal could be finalised by year’s end, the sources told Reuters this week. The larger modernisation effort will encompass training, infrastructure and anti-submarine warfare equipment, and could include orders from other countries, the sources said.

Saudi Arabia’s King Salman is due to meet with U.S. President Barack Obama in Washington this week, as Washington and Riyadh seek to shore up relations.

The Saudi Naval Expansion Program II has been under discussion for years, but U.S. sources say Saudi Arabia’s concerns about Iran have accelerated the effort.

“We’re not seeing that any strains in the U.S.-Saudi government to government relationship are inhibiting the business relationships,” said one source. “The Saudis remain very interested in buying U.S. technology.”

Roman Schweizer, analyst with Guggenheim Securities, said the king’s visit could “pave the way for a slew of military equipment orders from U.S. manufacturers.” He said U.S. officials were likely to give extra consideration to regional allies in the wake of the Iran deal.

Saudi and U.S. officials are also finalising details of a deal worth $1.9bn to buy 10 MH-60R helicopters, which can be used for anti-submarine warfare and other missions. U.S. lawmakers were notified of a deal in May.

The helicopters are built by Sikorsky Aircraft, a unit of United Technologies Corp and Lockheed, which is poised to take over Sikorsky by year-end.

In June, Sikorsky said Saudi Arabia was looking at an additional large order of Black Hawk helicopters as it moves to double its current fleet of 80.

Within a few years, Saudi Arabia is likely to buy Lockheed’s Terminal High Altitude Area Defense (THAAD) anti-ballistic missile system to augment the Patriot system. Lockheed officials have said they are upbeat about the prospects of reaching a THAAD deal, but add it may be several years off.

The fight against Islamic State of Iraq and Levant militants is also boosting Saudi demand for munitions. In July, the State Department approved $500m worth of munitions. for Saudi land forces, and Saudi officials are now looking at significant orders of Lockheed’s Paveway II Plus guided bomb systems to upgrade their existing inventory of bombs by adding laser-guidance systems.

State Department officials declined to comment on specific arms sales, but said they were in constant touch with Saudi officials since they are involved in the fight against ISIL and widening unrest in Yemen.

One of the biggest Saudi deals with a U.S.-based company in recent years was a contract worth up to $13bn that was announced in February 2014 for light armored vehicles to be built by the Canadian unit of General Dynamics Corp.

Boeing Co is building 84 F-15 fighter jets for the Gulf nation as part of a $33.4bn deal that includes dozens of Sikorsky helicopters.

The first of those jets are being tested at Edwards Air Force Base in California, said Boeing spokesman Todd Blecher.