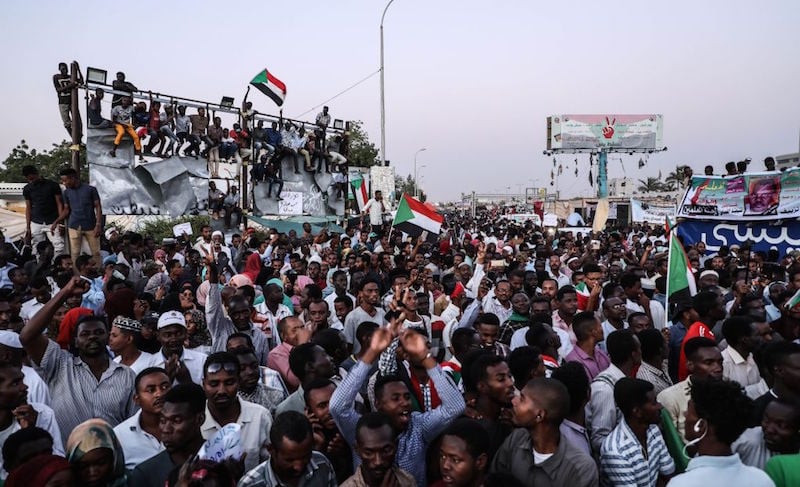 Saudi Arabia and the United Arab Emirates said on Sunday they had agreed to send Sudan $3bn worth of aid, throwing a lifeline to the country’s new military leaders after protests led to the ousting of president Omar al-Bashir.

The two Gulf Arab countries will deposit $500m with the Sudanese central bank and send the rest in the form of food, medicine and petroleum products, their state news agencies said in parallel statements.

The aid comes amid wrangling between the Transitional Military Council (TMC) and protesters and opposition groups who are demanding that civilians lead a two-year transitional period.

The protesters who have kept up a sit-in outside the Defence Ministry since Bashir was removed on April 11. They have demonstrated in large numbers over the past three days, pressing for a rapid handover to civilian rule.

TMC head Abdel Fattah al-Burhan told state TV that the formation of a joint military-civilian council – one of the activists’ demands – was being considered.

“The issue has been put forward for discussion and a vision has yet to be reached,” he said.

“The role of the military council complements the uprising and the blessed revolution,” said Burhan, adding that the TMC was committed to handing power over to the people.

But a coalition of protesters and opposition groups said the TMC was not serious about handing over power to civilians, describing the council as an “extension of the old regime”.

“We have decided to opt for escalation with the military council, not to recognise its legitimacy and to continue the sit-in and escalate the protests on the streets,” Mohamed al-Amin Abdel-Aziz, of the Sudanese Professional Association, told one of the largest crowds outside the defence ministry.

“All of them are at Kobar prison,” he said, adding that “a large number of symbols of the former regime suspected of corruption will stand trial”.

The aid from Saudi Arabia and the United Arab Emirates is the first major publicly announced assistance to Sudan from Gulf states in several years.

“This is to strengthen its financial position, ease the pressure on the Sudanese pound and increase stability in the exchange rate,” the Saudi Press Agency said.

Sudan’s state news agency said the central bank strengthened the Sudanese pound to 45 pounds to the dollar from 47.5, in a measure that coincided with the sharp rise in the price of the pound against the dollar on the parallel market.

The two Gulf states have ties with Burhan and his deputy, Mohamed Hamdan Dagalo, through their participation in the Saudi-led coalition fighting in Yemen.

Sudan has been suffering from a deepening economic crisis that has caused cash shortages and long queues at bakeries and petrol stations.

Analysts have blamed the crisis on economic mismanagement, corruption, and the impact of U.S. sanctions, as well as the loss of oil revenue when South Sudan seceded in 2011.

Burhan said a committee could travel to the United States for discussions about lifting Sudan from the list by next week. Washington has said Sudan will not be removed from the list as long as the military is in power.

The United States agreed in November to talks with Bashir’s government on how to get Sudan removed from the list, but no resolution was reached before his overthrow.

Over the last few years, Sudan’s cash-short government expanded money supply to cover the cost of expensive subsidies on fuel, wheat and pharmaceuticals, causing annual inflation of 73 percent and the Sudanese pound to plunge against the dollar.