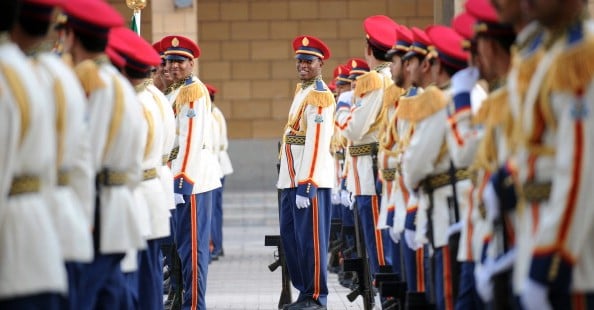 London’s International Institute for Strategic Studies said the United States remains by far the world’s pre-eminent military power, spending some $600 billion Last year, some 38 per cent of the global total.

Overall global defence spending probably fell marginally in 2013, it said, but increased dramatically in Asia and the Middle East. China’s military expenditure had increased by some 40 per cent since 2010, raising it to an estimated $112 billion.

That in itself is helping spark a wider Asian arms race, the report said, with Japan, South Korea, Vietnam and others also ramping up spending.

Despite a U.S. “pivot” to reallocate military forces to Asia, analysts say some countries – particularly Japan, locked in growing confrontation with Beijing over disputed maritime boundaries – worry that Washington might fail to back them in any conflict. Overall, Asian military spending in 2013 was 11.6 per cent higher than in 2010, it said.

In the Middle East, Gulf Arab state worries over Iran – as well as domestic discontent in the aftermath of the “Arab Spring” – has prompted Gulf Cooperation Council (GCC) members to significantly raise their spending.

“The West still spent over half of global defence outlays in 2013 (but) this is down from two thirds… in 2010,” IISS Director-General John Chipman told a press briefing. “Emerging economies continue to ramp up their defence spending levels.”

Russia increased its defence spending to some $68.2 billion, up 30 per cent from 2010 and now accounting for roughly a quarter of all European defence expenditure.

The report estimated Saudi Arabia was spending $59.6 billion – a figure researchers said was extremely conservative – pushing it above Britain at $57 billion or France at $52.4 billion. Saudi spending increased 8.6 percent in the 2012-13 period, it said.

Nevertheless, one of the central reasons for Saudi Arabia outpacing Britain was a shift in exchange rates, researchers said, meaning this could be reversed in 2014.

Of the top global spenders by percentage of gross domestic product, the vast majority were in the Middle East – Oman, Saudi Arabia, Iraq, Bahrain, Libya, Algeria, Yemen and Jordan.

If Chinese military spending continues to increase at the current pace, IISS researchers estimate it may overtake that of the United States sometime in the 2030s. But it would likely take longer to match Washington’s overall military capabilities, the IISS said.