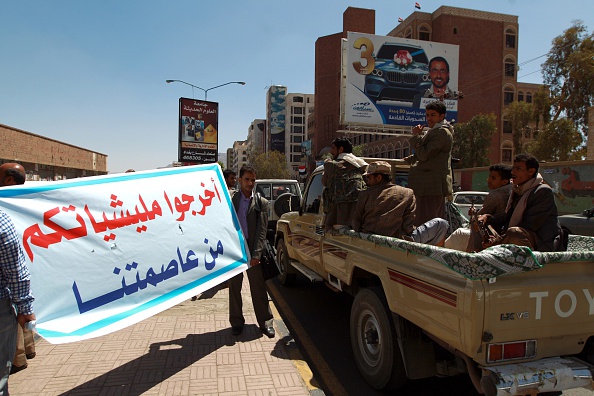 The capture of Yemen’s capital by rebels with ties to Iran has jolted Saudi Arabia, prompting a scramble by Riyadh to prevent its Shi’ite Muslim rival from exploiting the takeover to make trouble in the Kingdom’s backyard.

The Sunni Muslim country is also concerned that the security deterioration in its southern neighbour, where the Shi’ite Houthi fighters seized Sanaa on Sept. 21, does not benefit another old enemy, al Qaeda.

For the hereditary rulers of Saudi Arabia, the 1,400-km (870 mile) border with turbulent, impoverished Yemen which snakes over remote mountains and desert, has always been a security nightmare.

But with their ability to manipulate events south of the border at the lowest ebb in decades, the Kingdom’s ruling Al Saud are scrabbling to find Yemeni allies who can restore a semblance of order while remaining friendly with Riyadh.

Riyadh has always wielded greater influence in Yemen than other countries, yet while it remains a big aid donor, the chaos following the country’s 2011 uprising has left it with many potential foes there and few trusted friends.

For the Saudis, the risk is not only that Iran could gain a new foothold across the border via its ties with the Houthis, but that Al Qaeda in the Arabian Peninsula (AQAP) could take advantage of the unrest to plot new attacks.

“The struggle in Yemen is a threat to neighbouring countries and Saudi Arabia should worry about this. It could become another Taliban land,” said Abdullah al-Askar, head of the foreign affairs committee on Saudi Arabia’s Shoura Council which advises the government on policy.

The Houthis and other political parties signed a deal last month to form a more inclusive government after days of fighting in suburbs of Sanaa, giving the rebel movement a new and bigger stake in Yemeni politics.

“It takes a real government to take action against militants. Sanaa cannot be left in the hands of the Houthis and the Iranians. Iran should be under international pressure for this. It’s really enough. They should stop it,” said Askar.

There are longstanding connections between Iran and the Houthis, who have sent leading members to Tehran for training and who have borrowed widely from Iranian revolutionary ideology, but the extent of the relationship is not clear.

Still, what Askar and other Saudis fear is that the Houthis will follow the model laid out by Hezbollah in Lebanon, using popular support among Shi’ites combined with a hefty military presence to dominate politics and project Iranian might.

That would undermine Saudi Arabia’s position in what has become an important front of its region-wide rivalry with Iran, mainly contested along sectarian lines, by creating an ally for Tehran in Riyadh’s own backyard.

The security threat was underscored in July when an AQAP raiding party crossed the frontier to kill several Saudi border guards and detonate a bomb in a police building.

Saudi Arabia has always mistrusted the Houthis, who emerged early last decade demanding an end to the marginalisation of Zaydi Shi’ites, who make up around a third of Yemenis, and fought a brief border war with them from 2009-10.

Although the Houthi group started as a small-scale protest movement in one part of north Yemen, it rapidly gained in strength by tapping Zaydi grievances and wider anti-government sentiment and by allying with Tehran.

Zaydi theology is very different from the Shi’ism practised in Iran and most other parts of the Middle East, and the sect historically had good ties with Yemeni Sunnis. But one of the Houthis’ main grievances was the emergence of the hardline Salafi Sunni strain in Zaydi areas, which they believe was being encouraged by Saudi Arabia.

The Houthis’ subsequent fighting with Salafi groups, along with their deepening alliance with Iran and adoption of some of its revolutionary slogans, has since placed Yemen within a wider sectarian struggle fought by proxies of Riyadh and Tehran.

In March, Saudi Arabia banned the Houthis – along with Hezbollah and Sunni Islamist and militant movements including the Muslim Brotherhood, al Qaeda and Islamic State – declaring them terrorist organisations.

“What has happened in Yemen with the Houthis over the past two weeks has contributed to Riyadh’s attitude of extreme distrust of Iran,” said a diplomatic source in the Gulf.

Riyadh’s efforts to counter growing Houthi sway have been complicated, however, by chaos after the ousting of long-serving president Ali Abdullah Saleh, the decline of its own allies in Sanaa and mutual mistrust with its southern neighbour.

The most important of his Yemeni allies, Sheikh Abdullah al-Ahmar, head of the Hashid tribal confederation, died in 2007 prompting a slow decline in the power of his family among the tribes just as the Houthis were on the ascendancy.

It left Riyadh without a trusted ally at the very moment it most needed to project influence amid the political transition from Saleh under interim President Abd-Rabbo Mansour Hadi.

Saudi Interior Minister Prince Mohammed bin Nayef, whose war on AQAP has given him more control over Yemen policy than other princes, has worked closely with Hadi’s government, but few people see the transitional leader as a long-term power broker.

“The Yemeni situation is so complex that I’m not sure who the friends are who we could work with. But at least we know who our enemies there are, and the Houthis and al Qaeda are at the top,” said a Saudi political science professor who asked to remain anonymous.

Yemen’s other main political players include a southern separatist movement, which Riyadh distrusts, and the Islah party, which as an affiliate of the Muslim Brotherhood is regarded as anathema by Saudi rulers.

That might mean Riyadh has little option but to accept the Houthi ascendancy and work with the group.

One other possibility is that the Al Saud could back any attempt by the influential former president Saleh, who once described his success in ruling Yemen as “dancing on the heads of snakes”, to return to the political scene, analysts say.

Saleh was never a close Saudi ally and their disagreement over Iraq’s invasion of Kuwait in 1990 even led Riyadh to expel millions of Yemeni workers, prompting an economic crisis that accelerated the country’s march to civil war in 1994.

But the dearth of options has led some Saudis to regard the relative stability of his reign almost with nostalgia. “The central state of Yemen is very weak. The army is a shambles and couldn’t stand up to either al Qaeda or the Houthis. In the past, Saleh kept things peaceful,” said the analyst.