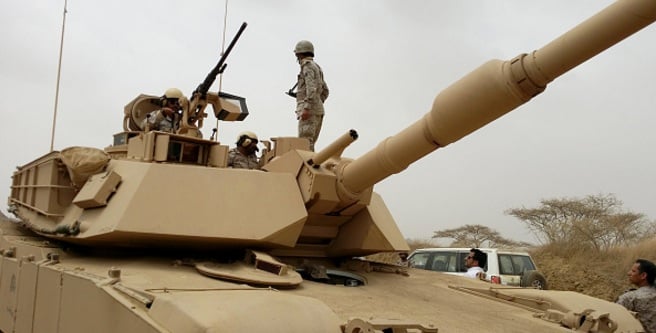 Saudi Arabia has replaced Russia as the third biggest military spender in the world, according to new findings by the Stockholm International Peace Research Institute.

Since 2006 the kingdom’s military spending has nearly doubled, exacerbated by its year-long war in Yemen, with SIPRI noting its expenditure as $87.2bn in 2015.

The United States remains at the top of the chart with military expenditure of $596bn, followed by China with $215bn (based on SIPRI estimates), and Russia in fourth with spending at $66.4bn.

Global military spending reached almost $1.7 trillion according to the institute which tracks arms expenditure around the world. The amount marks a year-on-year increase for the first time since 2011.

In its report, SIPRI noted that the global drop in oil prices has had a significant impact on arms sales in general, citing the fall in value of the rouble as the main contributor to Russia’s drop to fourth position.

In a statement, Sam Perlo-Freeman, head of SIPRI’s military expenditure project, said: “Military spending in 2015 presents contrasting trends. On the one hand, spending trends reflect the escalating conflict and tension in many parts of the world; on the other hand, they show a clear break from the oil-fueled surge in military spending of the past decade.

“This volatile economic and political situation creates an uncertain picture for the years to come.”