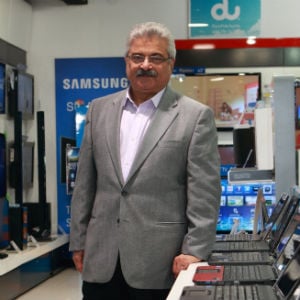 Korean brand Samsung currently enjoys the maximum market share in the UAE’s smartphone market, according to Deepak Babani, the CEO of electronic retailer Eros group, which is Samsung’s exclusive distributor in the UAE.

Samsung enjoys around a 40 per cent share in the UAE’s smartphone market, while Apple’s iPhone has a share of around 20 per cent, Babani told Gulf Business in an exclusive interview.

“In the total mobile phone market we are number two, with a share of 33- 34 per cent. Nokia is still leading at 37 – 38 per cent, but I think with the launch of Samsung Galaxy S3, we will surely bridge that gap,” he said.

“The last five months have been extremely good. At this rate, we will easily cross Dhs3 billion in 2012 and we may even reach Dhs3.2 billion- a good 35 to 40 per cent growth,” he said.

According to Babani, different products have been propelling the company’s growth. While it was TV flat panels last year, this year it is mainly smartphones.

“If I look at a yearly growth of mobile phones, it has almost increased three times. And this is just the beginning. We are getting a very exciting line up of phone coming in between July and December. And the joint ambition with Samsung is very high,” he said.

“We want to be by far the market leaders.”

While Babani admits that Apple’s iPhone is Samsung Galaxy’s biggest rival, he says that the Korean group enjoys certain advantages at the moment.

“In today’s global market, the Andriod platform has a much bigger base than Apple, and at this time, Android has over 150,000 applications. That’s our strength,” he said.

“Also, around 95 per cent of the apps on Android are currently free. On an iPhone, on an average, even a 10 to12 year-old boy spends at least $10 to $15 per month on apps and that’s a conservative estimate. Adults spend around $50 to $100 per month, whether they use or don’t use the apps.”

Babani admits that he downloads at least five free apps per month on his Galaxy S2. “These apps are so good, I don’t get tempted to buy the paid ones,” he said.

While he accepts that Android may start charging for apps in the future, Samsung currently enjoys a big advantage.

iPhone is also very US-centric, he stated, and in the Middle East, Samsung offers much better after-sales support and greater products and services.

“Where we stand out is that we make the hardware and the software. We even supply hardware to Apple. They tried to move out and go to Sharp, but they had to come back.

“So right now, we have the strength of technology. We don’t know what iPhone will come up with next. Also I am not discounting that Nokia may come up with Windows 8.

“But we will try to exploit the benefits that we currently have, and within this period, we want to see that we can move up the rankings, and reach the number one spot,” Babani said.