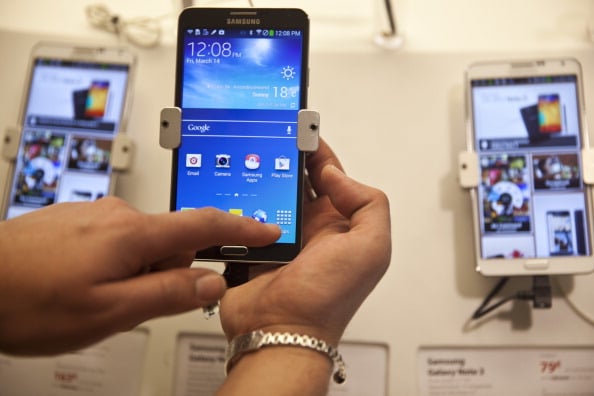 Samsung Electronics Co Ltd on Tuesday said it is on track to post its second straight quarter of profit decline, as margins in the key smartphone business come under growing pressure from cheaper Chinese rivals.

Samsung is counting on the fifth version of its flagship Galaxy S smartphone, which goes on sale globally from Friday, to right the ship and prove the firm’s staying power as a high-end innovator.

But the Galaxy S5 has already got off to a weak start at home, with its South Korean debut marred by a temporary ban on mobile carriers selling handsets and criticism that it lacks eye-catching new features.

Underscoring the challenges, Samsung priced the S5 about 10 per cent cheaper than the S4 even though main rival Apple Inc is not widely expected to update its line-up until September. It also dialled back on marketing glitz to keep margins stable.

Samsung estimated on Tuesday its January-March operating profit fell by 4.3 per cent to 8.4 trillion won ($7.96 billion), slightly below an average forecast of 8.5 trillion won by 40 analysts polled by Thomson Reuters I/B/E/S.

The figure was better than 8.35 trillion won forecast by StarMine’s SmartEstimate, which gives greater weighting to more accurate analysts.

Samsung estimated its first-quarter sales at 53 trillion won, compared with a market forecast of 54.58 trillion won. Full quarterly results are likely to be announced by April 25.

The firm gave no breakdown of mobile earnings but the unit typically generates about 70 per cent of total profit.

Analysts said the company’s efforts to rein in component costs and make products that appeal to a wider audience will be crucial as Samsung braces for what could be its first annual profit decline in three years.

“In some sense, Samsung has no way to prevent a decline in its earnings without improving internal efficiencies,” HMC Investment and Securities analyst Greg Roh said.

Shares of Samsung, Asia’s most valuable company with a market capitalisation of around $200 billion, were flat in early trade on Tuesday, giving up much of its gains from a day earlier in the absence of guidance surprises.

The stock is nearly 12 per cent off the record high hit in January last year, weighed by worries over high-end market saturation and competition from low-end phones made by the likes of Huawei Technologies Co Ltd.

Such headwinds may increase pressure on the company to use its cash holdings to boost languishing share prices.

The firm said in January that it would raise dividend payouts after hiking them by 79 per cent to a record 2.1 trillion won last year. A stockpile of 54.5 trillion won in cash and equivalents held at end-2013 suggests room for manoeuvre.

Warren Lau, an analyst at Maybank Kim Eng brokerage, said in a report that as Samsung generated about $24 billion in free cash flow each year, it could allocate $5.2 billion in funds to repurchase shares and another $2.8 billion for dividends.

But the company’s conservative management style means it has shied away from big acquisitions for the most part, and executives have not publicly commented on any buyback programme.

“High dividends give the impression that the company is no longer growing, and the most important thing for technology companies is growth; Samsung has repeated this message,” said IM Investment analyst Lee Min-hee ahead of Samsung’s guidance.

“Given that fact, I don’t think there will be a major share buyback or a dramatic increase in dividend payout.”