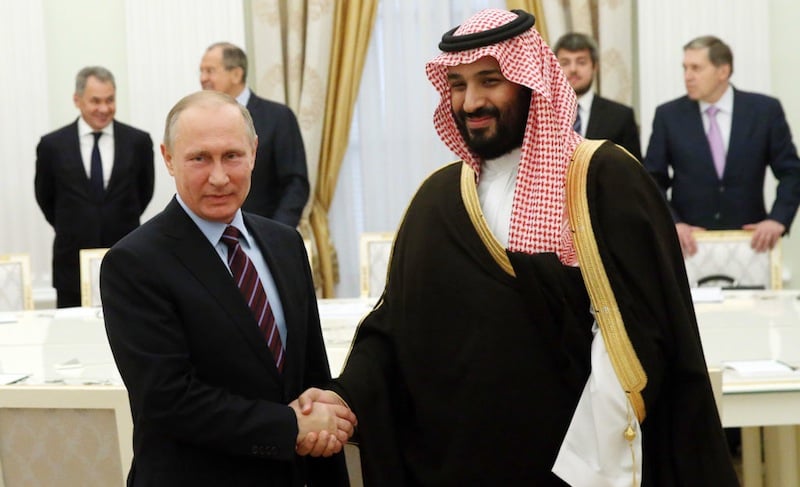 Russia and Saudi Arabia hailed their growing partnership in oil markets and dialogue on Syria on Tuesday, in a departure from past hostilities between the top global producers and major players in the Middle East.

Russian President Vladimir Putin heaped praise on Deputy Crown Prince Mohammed bin Salman, who looks after the kingdom’s defence and energy, as he welcomed the possible future king to the Kremlin.

It was the second meeting between the two men over the past year following a breakthrough meeting in China, where Putin and Prince Mohammed showed the first signs the world’s two biggest oil exporters could clinch a deal to prop up oil prices.

Non-OPEC Russia had long opposed any cooperation in reducing oil output in tandem with OPEC, where Saudi Arabia is de facto leader.

Russia’s military campaign in Syria to support President Bashar al-Assad in the past two years has effectively pitted the Kremlin in a direct military confrontation with Saudi Arabia as the Sunni kingdom has long fought for Assad’s removal.

But the oil price plunge in the last two years has overstretched the budgets of both producers, making joint cuts more likely, especially with Russia facing a presidential election next year and Saudi Arabia requiring higher prices for economic reforms and the listing of its energy giant Aramco.

“The relations between Saudi Arabia and Russia are going through one of their best moments ever,” Prince Mohammed told Putin.

“We have a lot of common ground. As far as our disagreements are concerned, we have a clear mechanism of how to overcome them. We are moving forward quickly and in a positive way,” he added.

“The most important thing is that we are succeeding in building a solid foundation to stabilise oil markets and energy prices,” Prince Mohammed said.

Last December, Russia and 10 other non-OPEC nations agreed to join OPEC’s output cuts for the first time in 15 years. Last week Moscow agreed to extend its cooperation by another nine months until March 2018.

Both Moscow and Riyadh said that cooperation would last beyond the current agreement as both countries are still trying to find ways to co-exist with U.S. shale oil producers, who are not part of the global output reduction deals.

As a part of Tuesday’s talks, the Public Investment Fund of Saudi Arabia signed a memorandum of understanding with the Russian Direct Investment Fund to explore an opportunity to join a consortium of investors in a Moscow real estate project.

“We are grateful to you for your ideas and the joint work between OPEC and the countries which are not part of the cartel,” Putin told Prince Mohammed.

“We support political contacts, contacts between defence ministries. We work together on sorting out difficult situations, including in Syria,” Putin said.