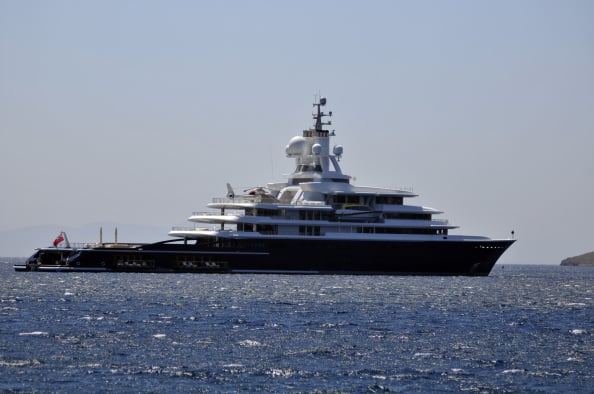 A Russian oil and gas billionaire has been granted the right to appeal the temporary seizure of his $545m superyacht, located in Dubai, according to reports.

The 377ft Luna was built for Russian billionaire and Chelsea FC owner Roman Abramovich before being sold to Farkhad Akhmedov for $400m in April 2014.

Akhmedov is understood to have spent $50m refitting the vessel that year and it now has two helipads, 10 VIP rooms across its nine decks and one of the world’s largest superyacht swimming pools.

Gulf News reports that the Dubai International Financial Centre Courts granted the billionaire’s Straight Establishment trust the right to appeal for the release of the ship on Tuesday, April 10.

It is believed to be in custody at the dry docks in Dubai’s Port Rashid.

The businessman is embroiled in a divorce battle with his former wife Tatiana Mikhavilovna Akhmedov after she won a British court order to seize his assets under a $641m settlement awarded in 2016.

Her lawyers argued earlier this year that she had yet to receive the proceeds from the settlement and she has hired companies to search for her former husband’s seizable assets across the globe.

Agents for the British courts petitioned the DIFC Courts to take control of the yacht and it ruled on February 8 to freeze the asset while it was moored in Dubai. A further enforcement order would be needed to take control of Luna and auction it to raise proceeds for the divorce settlement.

Tuesday’s decision by DIFC justice Michael Hwang to grant the appeal came because the original orders “were granted in circumstances of urgency which merit a second look whether those orders were appropriate in the circumstances of the case”.

Farkhad Akhmedov told Gulf News in an interview that he had divorced his wife in Russia and questioned the UK’s intervention across international borders to seize the yacht.

“To be clear, we were Russian citizens, not British citizens, when our seven-year marriage was formally dissolved in Russia in 2000 … from that moment, I provided generously for my ex-wife, enabling her — as has been well documented — to live enjoy a lavish lifestyle as the mother of my two eldest sons,” he was quoted as saying.

“This action entirely disregarded the fact that these assets had been placed in a family trust to be held for the benefit of all my children and grandchildren, my siblings and their families. It also ignored the many millions of dollars I have given to charitable causes.”

Managers of his Straight Establishment trust intend to fight for the yacht’s return and are providing for the 50 crew in Dubai.