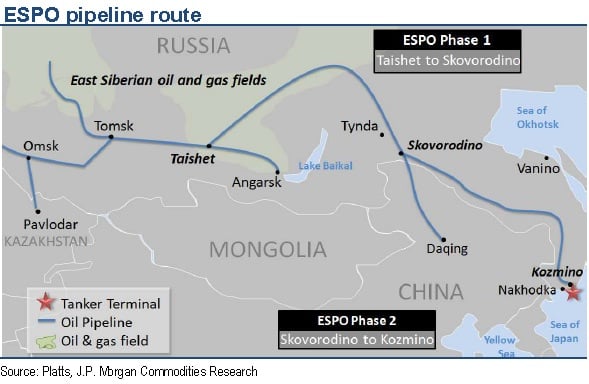 Russian President Vladimir Putin unveiled the final extension of a new $25bn oil pipeline to the Pacific on 25 December that highlights the country’s gradual shift away from stagnant European markets.

Moscow hopes to make ESPO into a benchmark in the Asia Pacific region that competes with West Texas Intermediate (WTI) — the US oil standard.

In early November, the Wall Street Journal shortlisted Russia’s ESPO blend as a potential benchmark along with Dubai’s DME Oman grade. ESPO oil is trading at a premium of more than $4 a barrel to Dubai crude after having traded at a discount when the first phase began piping oil.

The head of the Transneft state oil pipeline operator, Nikolai Tokarev, said that the American market would receive 35 per cent of the oil, while around 30 per cent will go to Japan and 28 per cent to China. The balance is destined for Singapore, Malaysia and South Korea

However, analysts worry that Russia may currently lack enough accessible oil in its underdeveloped East Siberia fields to keep the line fully flowing despite strong demand in China and Japan.

Mr Putin brushed those concerns aside as he joined in the ribbon-cutting ceremony by video link from the Far East city of Khabarovsk. “By completing the second leg, our potential is expanding,” Putin said in televised remarks.

The second leg of the 4,200km pipeline runs from fields west of Lake Baikal to the Pacific port of Kozmino near the northeastern edge of China.