by by Mary Sophia 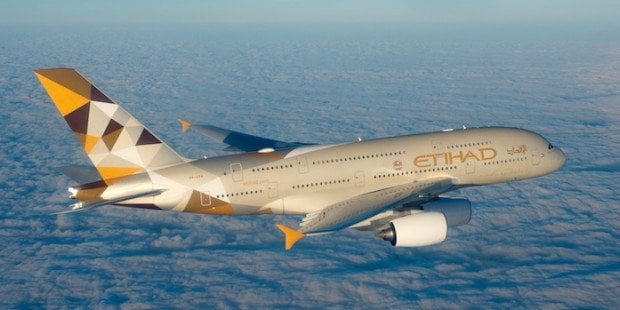 Abu Dhabi-based Etihad Airways said that it carried around 17.4 million passengers last year, up by 17 per cent from 2014.

Etihad and its equity partners accounted for 84 per cent of all traffic from Abu Dhabi International Airport in 2015, while Etihad alone carried 75 per cent of traffic.

This was thanks to new codeshare deals with Pakistan International Airlines and the expansion of existing agreements with its other partners Air Serbia, American Airlines, flynas, Jet Airways, Korean Air, NIKI and S7 Airlines.

“We enter 2016 with confidence as a stronger, more dynamic airline that will continue to support the evolution of Abu Dhabi as a global aviation hub,” said Etihad Airways president and chief executive James Hogan.

”We continue to face challenges, not least the protectionism of the major American and European legacy carriers. We will continue to fight to bring new competitive choice to travellers around the world.”

It also raised capacity on its existing routes by operating wide-body aircraft and increasing the frequency of its services . In 2015, the Abu Dhabi carrier deployed a Boeing 787-9 Dreamliner to Washington DC, Zurich, Singapore and Brisbane and its A380 network was expanded with a second service to London Heathrow and new flights to Sydney and New York.

In 2016, Etihad said that it will launch its third daily A380 service to London Heathrow in addition to deploying the aircraft to Mumbai and Melbourne. The airline also plans to fly Boeing 787s on routes including Düsseldorf, Perth, Shanghai, Istanbul and Johannesburg.

The airline said it expects to receive five Boeing 787-9s, three A380s and two Boeing 777-200 Freighters this year, adding to the 10 aircraft it took delivery of last year. Etihad Airways’ fleet consisted of 121 aircraft at the end of 2015.

In cargo, Etihad reported a 4 per cent increase in volumes to 592,090 tonnes of freight and mail carried.