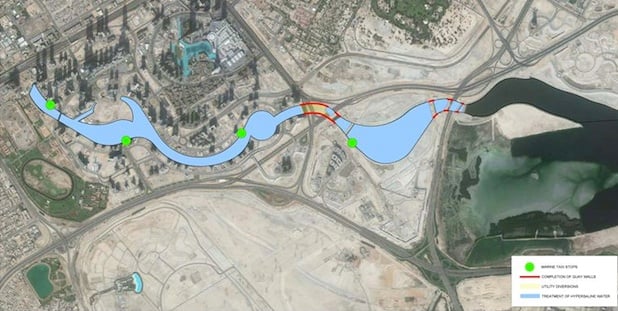 Dubai’s Roads and Transport Authority has awarded a Dhs 703m contract for phases four and five of the upcoming Water Canal project, it announced on Saturday.

Phase four, which costs about Dhs 307m, is part of infrastructural works for property development on both sides of the canal, including roads and utility lines.

Meanwhile the fifth phase – which costs about Dhs 396m – will link the Business Bay Canal with the Dubai Water Canal and terminate at the Arabian Gulf.

The canal stretches 3.2 km from the Business Bay Canal up to the Arabian Gulf via the Sheikh Zayed Road, Al Wasl Road and Jumeirah Road.

Works include building quay walls of precast concrete slabs all along the stretch of the canal, completing and diverting utility lines and key services and the removal of impacted services.

This phase will also include the treatment of hypersaline water of the Business Bay lakes, removing sand barriers in the course of the canal and constructing three marine transport stations on both sides of it, said RTA director-general and chairman Mattar Al Tayer.

“Projects to be constructed on the waterfront will be served by modern water transport means, and result in improved quality of water in the Dubai Creek,” he added.

Under the contract, both the phases are set for completion by the end of September this year.

The RTA also confirmed that construction work on the project is progressing “according to the approved time chart”.

Phase one of the project includes the construction of a two-way 16-lane bridge over Sheikh Zayed Road bridge, which is now 92 per cent complete, the authority said.

RTA recently opened the northern bridge on the road from Abu Dhabi to Dubai while the completion rate in the Abu Dhabi-bound southern bridge has reached 81 per cent.

The bridge is expected to be fully opened in July this year, the authority said.

The project’s second phase – which includes constructing bridges on Al Wasl and Jumeirah Roads – is now 86 per cent complete. 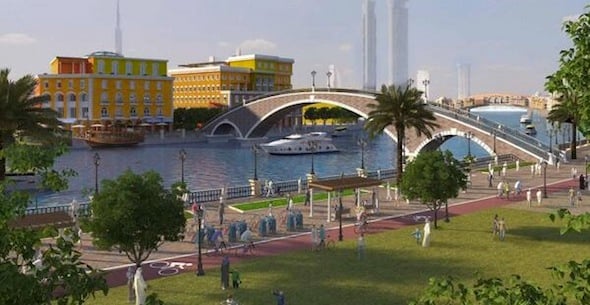 The bridges will allow the passage of boats up to 8 metre-high.

This phase also includes the construction of an interchange to link the traffic movement between Al Wasl, Al Hadiqa and Al Aathar Roads.

Meanwhile the completion rate in phase three of the project has crossed 75 per cent, the RTA said.

This includes the construction of quay walls, protecting the utility lines, diverting sewage lines on both sides of the canal, building a sewage pumping plant and constructing a coastal breakwater.

The third phase also includes landfilling works to build a man-made peninsula along the Jumeirah Park, which will double the beach line of the Park, increase the park area and allow for more leisure activities.

Under this phase, three pedestrian bridges will also be constructed to link the two sides of the canal and 10 marine transit stations will be built, “especially after the completion of several islands such as The World and Jumeirah 2,” the RTA said.