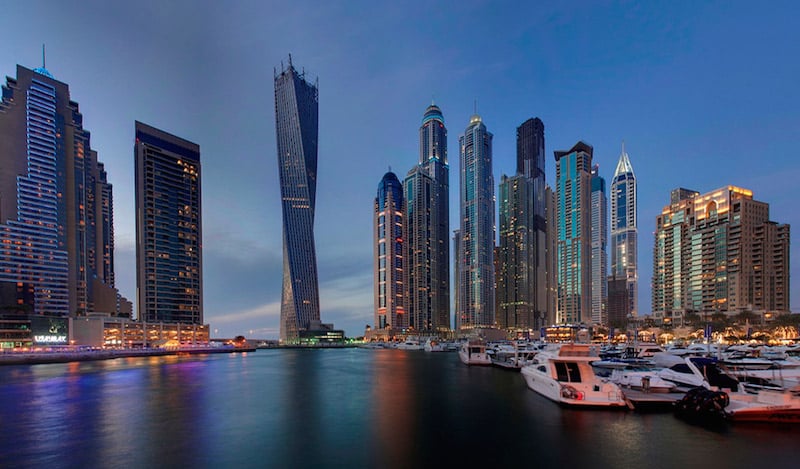 Dubai-based hotel management company Rotana has taken over the management of Dubai’s tallest twisted building, the Cayan Tower, it announced on Tuesday.

Located in Dubai Marina, the Cayan Tower – which briefly held the record for being the tallest twisted tower in the world – stands 307 metres in height.

The residential property, spread over 73 floors, includes 490 units and seven retail outlets. Designed by Skidmore Owings & Merrill, the tower’s twisting shape spirals in a 90 degree curve to give every apartment a view of the Arabian Sea or Dubai Marina.

The ninth tallest residential high-rise building in the world, Cayan Tower was developed by the Cayan Group.

Rotana will now manage the property under its ‘The Residences by Rotana’ brand, a statement said.

Omer Kaddouri, president and CEO of Rotana said: “Cayan Tower brings Rotana’s total inventory under ‘The Residences by Rotana’ brand to 939 keys and will be a significant addition to our portfolio in Dubai.”

The company also confirmed that it will operate a property in Bosnia and Herzegovina’s capital city, Sarajevo, marking its entry into Southeast Europe.

Located at the Bosmal City Centre complex in Sarajevo, Bosmal Arjaan by Rotana will be the second tallest residential tower in the Balkans region when it opens by the end of 2018, the statement said.

Managed under the ‘Arjaan Hotel Apartments by Rotana’ brand, the property will feature 130 two and three-bedroom units, a gymnasium, two indoor pools, a sauna, a Turkish bath, and multiple treatment rooms.

The project will increase Rotana’s portfolio under its Arjaan brand to 3,143 rooms.

“With our first property in Bosnia and Herzegovina, we are strategically positioned to cater to the growing number of short and long-term visitors in the country,” he added.

The company manages a portfolio of over 100 properties throughout the Middle East, Africa and Turkey, with an operational portfolio of 16,964 keys and a pipeline of 11,087 keys worldwide.