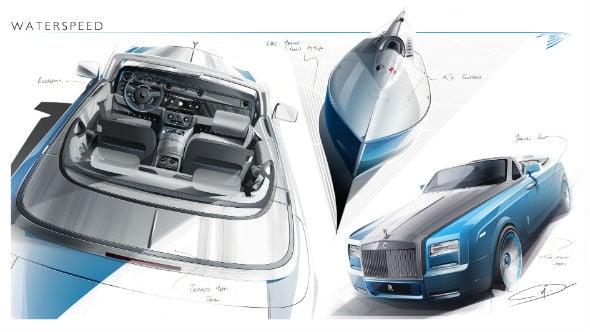 Rolls-Royce has revealed an exclusive sketch of the Bespoke Waterspeed Collection – a series of 35 Phantom Drophead Coupés the British car manufacturer is in the process of creating.

The image is the biggest insight so far into the luxury car maker’s latest bespoke project, with further details to be revealed over the coming months.

The car’s design is inspired by Sir Malcolm Campbell’s water speed record of 1937, when he reached 129.5 mph on Lake Maggiore on the Swiss-Italian border.

Sir Campbell was behind the rudder of his Bluebird K3 hydroplane boat, powered by Rolls-Royce’s R-Type engines.

Fittingly, the limited edition models will take inspiration from the Bluebird, with brushed steel, hand-crafted wood inlays and a Maggiore Blue colour scheme.

There is no word yet on how many models will reach the Middle East but given the region was the brand’s best performing market last year, and has the highest rate of bespoke work, logic suggests the collection will appear in the Gulf.

“Sir Malcolm Campbell’s successful pursuit of world-speed records on land and water were the result of his commitment to the most exacting standards of British design and engineering excellence,” said Torsten Müller-Ötvös, chief executive officer, Rolls-Royce Motor Cars.

“Such attributes are hallmarks of every Rolls-Royce motor car, ensuring the marque’s position at the pinnacle of super-luxury manufacturing. This special Collection, and those to follow in 2014, serve to display the breadth of Bespoke personalisation available to every Rolls-Royce customer. I very much look forward to revealing these remarkable cars over the coming months.”

In an interview with Gulf Business last month, Müller-Ötvös complimented the company’s long-standing tradition with the region: “Middle Eastern customers are very discerning customers, they strive for perfection,” he said.

“The majority of our customers are entrepreneurs and the reason they are successful is their search for perfection and to go the extra mile.”

Rolls-Royce Middle East reported a fourth consecutive record year in 2013, with sales up 17 per cent year-on-year.