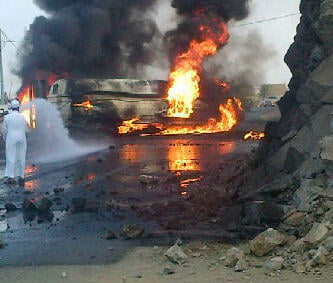 A large explosion in eastern Riyadh on Thursday morning has left at least 22 people dead after a fuel truck crashed into a concrete flyover, triggering a huge explosion which destroyed a nearby industrial building.

Saudi state television reported the updated figure while Al-Ekhbariya television quoted a Saudi civil defence official as saying that 111 people were wounded in the incident.

The building was almost levelled by the blast with only one corner left standing, a witness said. Nearby vehicles were on fire and over one hundred emergency personal were at the scene.

A spokesperson for The Riyadh Civil Defence confirmed there were deaths from what he called ‘a traffic accident involving a gas tanker that hit a bridge, causing a gas leak and an explosion in a nearby heavy machinery and vehicles warehouse’, according to the state news agency SPA.

“The truck driver was surprised by a road accident on its route, causing it to crash into one of the pillars of the bridge,” said spokesman Captain Mohamed Hubail Hammadi.

He said the incident resulted in a “number of deaths and injuries”, without giving specific details.

Saed al-Tweijri, civil defence chief, blamed the driver of the tanker for the accident, which he said had resulted in the gas leak setting off an explosion in the warehouse. He said the fire had been brought under control.

Speaking to Reuters, survivor Kushnoo Akhtara, a 55-year-old Pakistani worker, said: “I was inside the building when the blast came. Then boom, the building collapsed. Furniture, chairs and cabinets blasted into the room I was in.

“My brother is still inside under the rubble. There are lots of people in there.”

The industrial building which housed operations of Zahid Tractor – a distributor of heavy machinery – was several stories high and was almost entirely destroyed while several adjacent buildings were damaged and nearby vehicles, including a minibus on the flyover, were set on fire, according to witnesses.