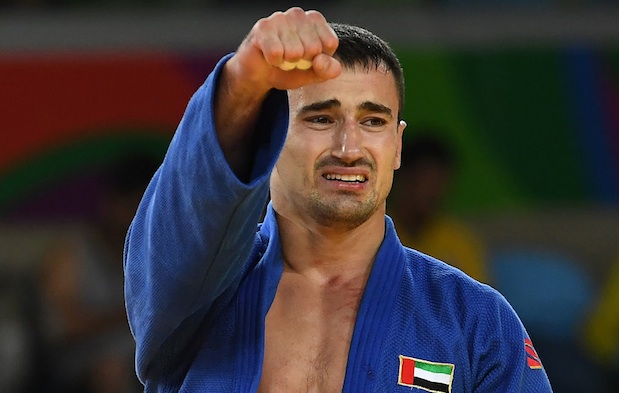 The UAE has won its second-ever Olympics medal after Sergiu Toma won the bronze in the under-81kg judo match in Rio.

Toma beat Italian Matteo Marconcini to win the medal on Tuesday. Russia’s Khasan Khalmurzaev won the gold while Travis Sevens from the US took home the silver.

“What can I feel? I am happy, no?” Toma said immediately his win. “I want to say thank you to everyone who was close to me and supported me: people from my country, Moldova; people from the UAE; and my coach. This is a medal for the UAE, for sure.”

“It is an important medal because it is the first time the UAE give me the possibility to represent this big country,” he said.

“We always dreamt of giving the best results for this country because they always support the team. They never say no. If the coach says we want to go to Tokyo, the UAE say ‘OK’ and organise a training camp for us there. So I want to say thank you and I hope it is not the last medal.”

Toma, 29, is one of three Moldovan judoka representing the UAE at the Olympics.

“This is the result of huge effort we’ve been putting in at the federation for a long time,” president of the UAE federation Mohamed bin Thaaloob Al Derei told Abu Dhabi Sports channel.

“We have professional staff that is of very high level and have organised lots of world-class events.

“This achievement is credit to the federation, to the ministry of sport, to the UAE Olympic Committee, to every athlete who has worked hard.”

The UAE’s contingent to the Rio Olympics includes 13 athletes including two swimmers and three shooters.