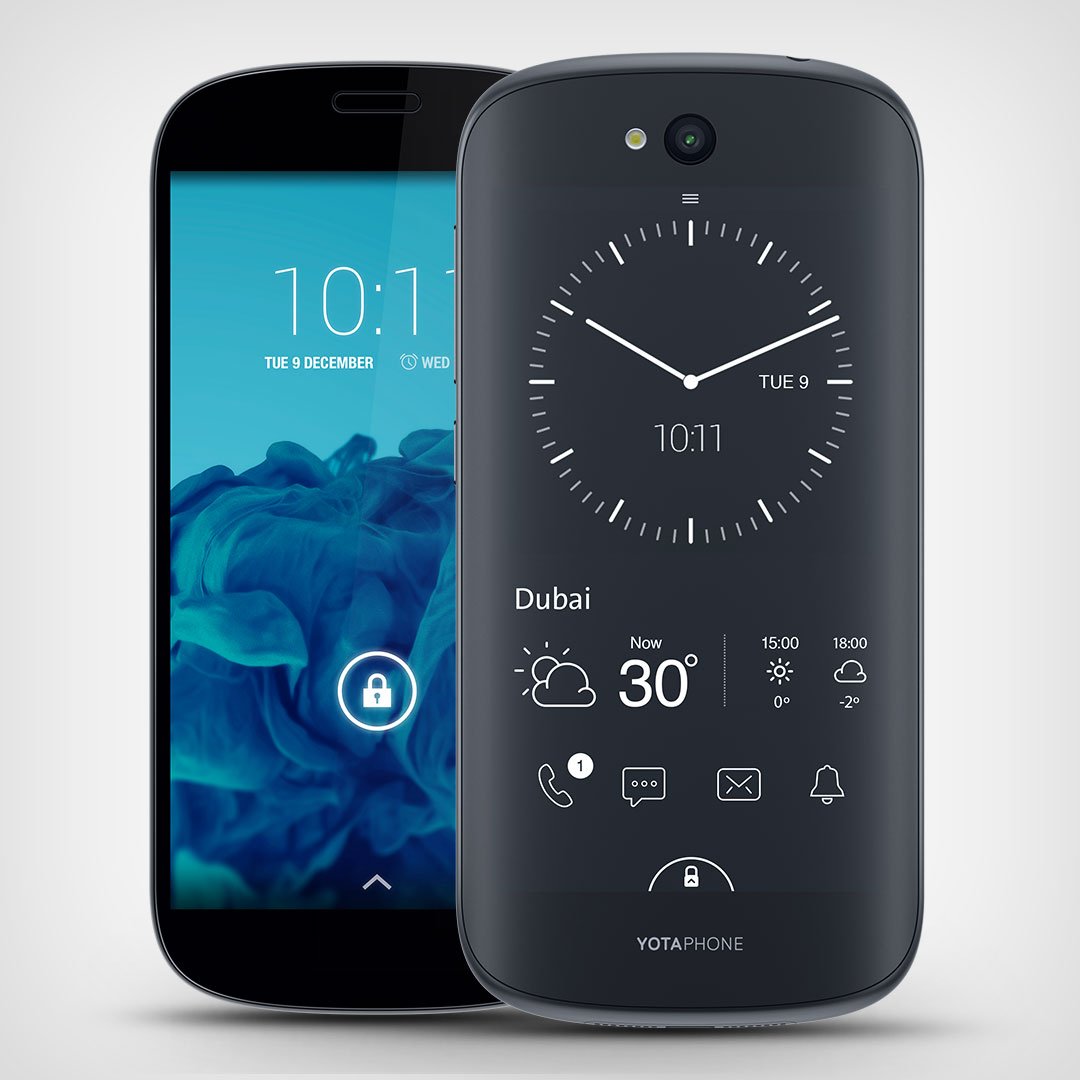 The original Yotaphone made its way to the Middle East in May last year, six months after other markets. Fast- forward half a year and Yota Devices seems to have learnt its lesson, bringing the YotaPhone 2 to us in December only days after Russia and Europe.

Let’s tackle the basics first – how does the device stand up to the competition? Specs wise, fairly well.

The high quality 1080p 5-inch front display, LTE functionality, 2.2GHz quad- core processor, 2GB of RAM and 32GB of storage combine for a phone that is less powerful than some recent entries but still offers swift browsing, gaming and video. The lower megapixel rear camera (8MP) and lack of SD card slot will put some off, however.

But if specs are your main concern, this isn’t the phone for you. Instead the YotaPhone 2 is targeted at those looking for something a little different from the standard smartphone experience.

The key feature on the YotaPhone, as before, is the 4.7-inch e-ink display on the rear of the device.

This “always on” display, encouraged to be the user’s main point of interaction with the smartphone due to its superior power efficiency, has undergone a significant functionality overhaul, providing plenty more use cases than its predecessor.

For one, the YotaMirror application now allows the vanilla Android on the front AMOLED screen to be transferred to the back. So all the applications you’re used to can now be viewed in black and white e-ink.

In practice, this takes a little while to get used to and isn’t suitable for high interaction purposes, as the e-ink refresh rate means there is up to a second delay between presses and actions.

But for web browsing, emails and social media, the secondary display is easier on the eye, more visible in direct sunlight and can even be used for high quality selfies if the front 2.1MP shooter isn’t good enough for you.

Accessing Android also has the added benefit of enabling a choice of e-book applications like Amazon Kindle to be viewed on the rear display, making for a flexible mini e-reader that can easily replace a larger device in a pinch.

In fact, if you restrict use to just e-books, Yota claims the phone will last 100 hours on a single charge, although we were unable to test this.

During our review, battery life was impressive but not superior to some of the newer Android devices on the market right now. Although, we may not have used the rear display as religiously as the manufacturer intended.

E-book credentials aside, other features include the YotaPanel, a customisable array of widgets for the always-on rear of the device.

This is designed to prevent you from needing to switch on the front display every few minutes to check for activity.

The dashboard includes email, text, call, calendar, social media, weather and clock widgets and can be hidden behind a YotaCover image of your choosing or taken randomly from your Facebook or phone album.

YotaSnap also makes a return, enabling an important message, map, image, or e-boarding pass to be saved on the rear display, even if the phone is out of battery, which can be useful while away on business.

Other additions include specially designed e-ink apps, with a selection of games that were a welcome companion while waiting for a significant other to try on shoes during a shopping trip.

Tying together the unique YotaPhone 2 package is a curved edge design that is pleasing to look at and hold despite being mainly plastic, while also remarkably thin (8.95mm) and light (145g) given the secondary display.

Unfortunately though, with the device priced at Dhs2,999, what will also be remarkably thin and light after purchase is your wallet.

We applaud the differentiation in a world of identical looking and functioning smartphones, but at a price comparable to and higher than some versions of the iPhone 6 (and without the brand recognition to go with it), the audience for YotaPhone 2 may be limited.

If you have money to spend, however, and you’re looking for something different, this could be the device for you.