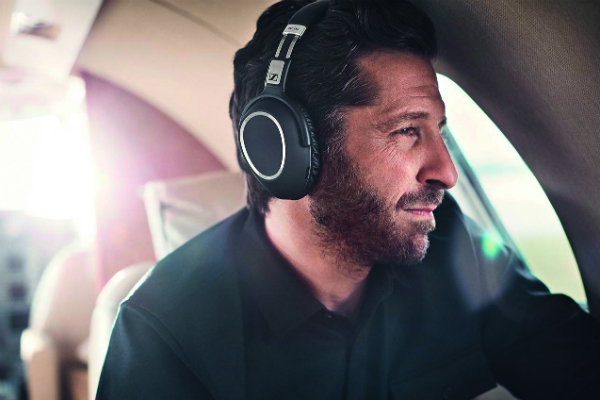 Despite the call to ‘upgrade to first class’ on the box, Sennheiser’s latest wireless headset, the PXC 550, is surprisingly understated in its design.

A shimmer of metal around the ear cups is perhaps the only indication of the quality underneath in what is an otherwise simple matte black aesthetic.

But appearances in the headphone world can be deceptive and from the moment you place the device over your ears you are given an indication of the complexity beneath the surface.

Rather than a switch or equivalent slider. the device will automatically turn on when you uncurl the cups from the flat position and turn off when you revert them back.

Then there is the egg-shaped cup interior and premium soft padding, providing comfortable insulation from the world around you.

Yet these are perhaps only side factors in a market where one thing is king – sound quality. And this is where the PXC 550 seeks to justify its $399 price tag.

After connecting to my phone via Bluetooth and listening to everything from drum and bass, rock, pop, hip hop and classical I was left impressed by the headset’s ability to tackle even the most complex tracks with audio clarity, crisp vocals and balanced bass.

Adding to the audio experience are speech, club and move listening modes and two forms of noise cancellation. The first actively blocks out exterior noise, while the second scales depending on ambient noise and is more comfortable over longer periods as a result.

In practice I found the active mode best for blocking out the noisy hum of the office air conditioning, chatter and other background noise and it proved effective in most day-to-day environments.

However, on the odd occasion where the noise was excessive, such as when people were talking loudly nearby, it did sometimes seem to struggle and overall left me less impressed than I was with the sound dampening capabilities of the rival Bose QuietComfort 35 I reviewed a few months ago.

Outside of the physical switches for these two functions, other interaction with the device is performed with a more futuristic flair.

The external side of both cups doubles as a touch screen that can be flicked up or down to raise or lower the volume, tapped to pause or start and flicked right or light to skip back or forward a track.

I was sceptical of the feature at first having tried other headphones with similar systems that were clunky or unresponsive but was left pleasantly surprised overall.

If I have one criticism it is that the delay between the tap to stop or start playing is half a second too long occasionally leading to repeated presses.

Another slight issue is that if you are wearing the headphones out in public you can attract funny looks on occasion with passers-by wondering if you are brushing off dirt or simply trying to draw attention to your expensive gadget.

Should all this talk of touch screens and Bluetooth connectivity leave you longing for a more traditional experience Sennheiser has thankfully provided an alternative.

Included in the case is a wire with a physical control if you want to connect to a device without Bluetooth or simply prefer the sound of wired audio.

Unlike Bose’s offering I did not notice a dip in listening quality when switching to wired mode and it will still work even if the device is out of battery, although without the noise cancelling and equalisation settings.

There is also a double-pronged adapter to plug into the inflight entertainment on plane journeys and a larger audio jack adapter for specialist musical equipment.

These are all nice to have but mean the holding case, which also includes a USB charging cable, is a little large.

Fortunately though if you do plan on leaving the case and associated cables at home you are unlikely to run out of juice.

The device is claimed to last 30 hours on full battery and I was generally impressed by only having to recharge after a week of on and off listening.

All in all the PXC 550 certainly does a lot of things right, with great battery life and some interesting features and accessories. Its main challenge is justifying a quite hefty price tag, but audio quality may be just enough to open hearts, minds and wallets.