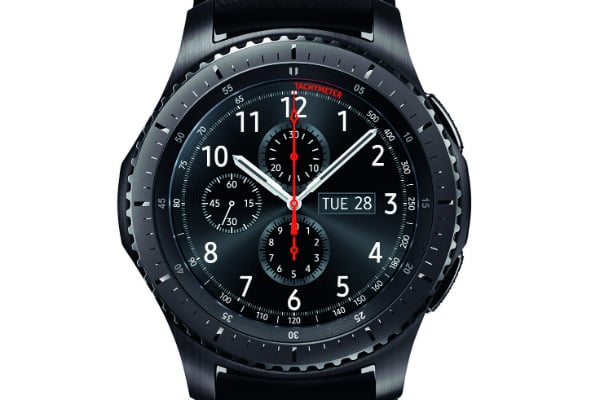 Having liked the Samsung Gear S2’s bezel design, I was curious to see what would come next from the South Korean manufacturer in a smart watch market prone to hits and misses.

Some months later I have my answer, with a device that has clear similarities to its predecessor but also a number of improvements.

Gone is the smooth matte and minimalist exterior of the S2, replaced by something altogether chunkier. This uptick in bulk and weight has left some a little bemused and may not suit all wrists, but to me it is by no means a bad thing and feels reassuringly sturdy.

The Frontier is the sportier of the two Gear S3 devices and is more rugged as a result, with an appearance that bears a resemblance to Casio’s G-Shock line. This means it is better suited to casual wear and working out than the more formal Classic, but won’t quite look to the part with a suit and tie.

The strap is rubber for added flexibility and the main dark metallic body does not show marks easily, which is useful if you’re planning to wear it at the gym or for other intensive exercise. Overall, the watch feels solid on the wrist and the included water and dust resistance certainly provides additional reassurance when at the beach or by the pool even if you may not want to risk taking it for a swim.

As mentioned, the S3 carries forward Samsung’s bezel design, but with some notable improvements. The rotatable rim on the Frontier version features minute markings and handy ridges so you can turn it with a firm grip, even if your hands are sweaty. Navigating the device via this method feels responsive and combined with the two buttons to go back and access the app menu means you rarely have to interact using the limited touch screen space.

Adding to this interaction is a crisp Super AMOLED display that remains visible in different lighting conditions and offers plenty of customisation options on its various watch faces.

If there is any detraction from my generally trouble-free first impressions it is the set up process when connecting via Bluetooth to your smartphone, with several plugins and apps requiring installation.

As before, Samsung has also opted for its own Tizen operating system rather than Google’s Android Wear. Although perfectly user friendly and easy to navigate in day-to-day use, the manufacturer’s OS limits your potential app library compared to other devices. You will also need to set up a Samsung account to install apps from the manufacturer’s store, which is an added nuisance.

Arguably the S3’s main strong point is in the area of fitness and activity. The included step counter, accelerometer and heart rate monitor are great at keeping track of your workout and there is even an altimeter and barometer for additional information. Perhaps the key highlight though is the nudge function, which informs you if you’ve been inactive for more than an hour and encourages you to do stretches or other exercise, with reassuring praise should you relent and get up from your desk.

The device will also automatically detect when you start a workout or walk and provide you with daily calorie count and even sleep monitoring if you leave it on overnight. One slight disappointment was the GPS tracker, which sometimes proved inaccurate for mapping a run due to its inability to find a signal. There was also the occasional issue with the workout detection, with one mammoth typing session in the office mistaken for a bike ride.

Beyond its workout functionality, the S3’s notification tracking is just as good as any you’ll see on an Android Wear watch and the bezel can make scrolling through emails and messages much easier. The device can also be used to control your phone’s music player and there is the added ability to upload tracks directly onto it for independent use with Bluetooth headphones or even the watch’s surprisingly powerful internal speaker, which can also be used for calls.

Another notable addition given its recent introduction in the UAE is Samsung Pay functionality. This means you can make contactless payments without even having to reach for your smartphone, which certainly saves time and effort where it is supported. There is also the usual ‘find your phone’, weather and voice command functionality, and Samsung’s surprisingly useful news compiler app.

Given all this functionality, the device’s battery life is surprisingly lengthy and it should keep going for up to three days or more for less intensive users. Once it is time to charge, the process is thankfully simple with the included wireless cradle, meaning you do not need to fiddle with connectors.

Overall the Gear S3 Frontier package is impressive and certainly seems a further step in the right direction after the S2. One minor concern as before is the device’s long-term viability if app support is lacking in Samsung’s store, but for now it is certainly a competitive offering in a market still finding its way.

The Gear S3 Frontier is available in black for around Dhs999.