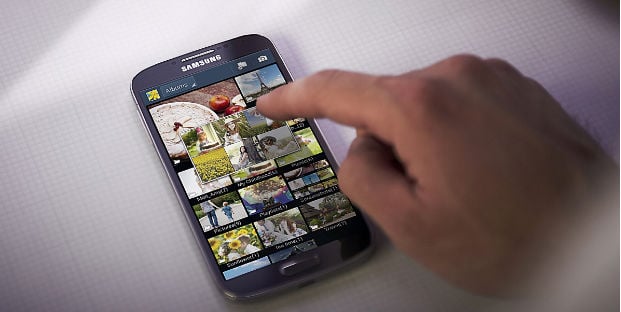 Rumours and leaked photos of the Samsung Galaxy S4 began circulating online as early as November 2012, and phone junkies started getting giddy with anticipation.

Luckily, the S4 doesn’t disappoint, and comes loaded with an unending list of features, certain to keep users hooked on to it.

While the phone largely resembles the Galaxy S3 in terms of looks, the S4 boasts a larger screen size compared to its predecessor, with a 5-inch full HD bright and colourful display. Weighing just 130 grams, the phone feels light in your hand and it’s also quite slim at 7.9mm.

We were not too impressed with the polycarbonate chassis and flimsy plastic casing – considering that most phones now come with the more sophisticated aluminium casing, but that is probably our only major complaint.

Operating on Android 4.2.2, the device has a 13-megapixel rear camera, and a bunch of interesting shooting modes such as ‘Sound & shot’ – which allows you to record nine seconds of sound after you have snapped your picture; ‘Double shot’ – where you can take one shot using both the cameras, and ‘Animated photo’ – using which you can animate and/or freeze parts of a picture.

The best part is that all of them work, are easy to use, and can leave you feeling like a child, showing off every new feature to an (mostly) admiring audience.

The device also comes equipped with face, voice and motion detectors: ‘Smart Pause’ pauses videos when you look away – very futuristic; ‘Smart Scroll’ allows you to scroll the browser without touching the screen, ‘Air View’ enables you to preview content without having to open any folder and with ‘Air Gesture’, you can accept calls, browse through your images and change music without touching the screen – great when you are eating greasy chips.

Quick note: These features work only on some apps, and require both patience and practice before you can truly master them.

The S4 also works as an IR remote to control your TV, set-top box, DVD player and AC with its ‘WatchON’ feature – it took us less than a minute to activate it on a Sony TV and it worked smoothly.

Overall, the S4 is truly a fantastic device to own. But it’s difficult to predict if the phone’s gimmicky features have the punch to persuade existing S3 users to shell out Dhs2,599.

The device currently comes with two color options – Black Mist and White Frost in the UAE.