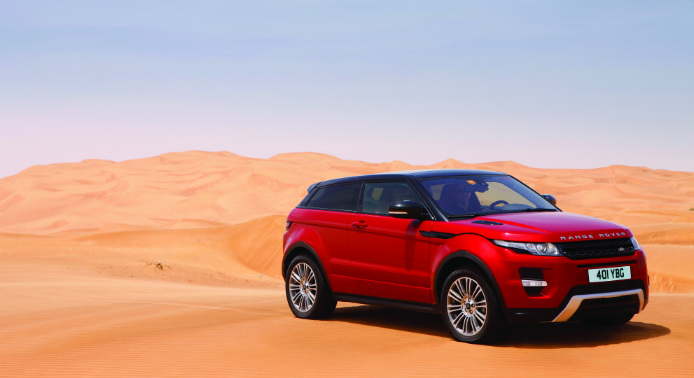 It seems a little strange for the world’s most renowned 4×4 brand to brag about producing it’s smallest ever model. But with the Evoque, which stands at just 1.6 metres high, Range Rover has done just that. Once you’ve driven it however you will utterly understand why.

Let’s tackle the obvious issue – it’s appearance. Yes it does look more feminine than any other Range Rover to date and in that respect should appeal to a larger female market than before, which is no bad thing. But to judge this car simply on its exterior is a mammoth error.

Inside and behind the wheel, it is immediately clear why Range Rover has billed the Evoque as its most luxurious model to date. And believe me, it is as appealing for Adam as it is for Eve.

The interior styling is superb. Over 10 square metres of leather kits out the seats and door panels, complimented by metallic finishing on controls and the centre console. The dashboard, instrument panel and fascia mid-section are all smooth to touch, with a hidden stowaway pocket discreetly tucked behind the control unit.

The 8-inch touchscreen is easy to use and comes with dual-view technology – where the driver can see one thing while the passenger watches another. The sat nav, radio options and media connectivity are all without flaw, but it is the Bluetooth connection that really stands out. Making a phone call through the voice activation is seamless and the swift progression from playing music on your phone to receiving a call and back to your playlist is impressive. That said, the Meridian sound system is disappointingly weak.

The back seats are snug but not uncomfortable, with the overwhelming feeling being one of surprise that your legs aren’t jammed against the seat in front. In the coupé however, climbing out from the rear seat is awkward and difficult. Opt for the five-door if you intend to chauffer adults regularly.

A full car-length glass roof allows for plenty of natural light, complimenting the very reasonable all-round visibility, despite the smaller than normal rear window. The boot is disappointing with a capacity space more suited to a hatchback, which is understandable really given the Evoque’s smaller than normal Range Rover size. But it’s hard to envision hosting a picnic from the tailgate, as the brand’s image has been associated with over the years.

The Evoque uses a 2.0-litre Si4 turbocharged engine producing 240 horsepower, sending the car from 0-100 km/h in 7.6 seconds. Although the turbo can be a little jolty, as can be the case with four cylinders, there is good torque available.

On motorways, however, the car loses some of its quiet charm, the road noise waking you up from the luxury cocoon. The ride is surprisingly rough too; speed bumps can’t be brushed aside like in its bigger siblings.

The six-speed transmission is smooth, though it stays in first gear slightly longer than you want it to – paddles are available.

The Evoque attempts to answer the perennial question all Range Rover models that aren’t traditional hulking bodyworks have to answer – can it go off-road – with multiple off-road options: grass/gravel/snow, mud and ruts, and most importantly for the Gulf, sand. It also has a dynamic option, should you ever find yourself on racing asphalt.

Without a doubt the Evoque is a fantastic addition to the 4×4 family and it doesn’t restrict itself to one gender, though it is better suited to the young and well heeled. Stepping out of it however, it is peculiar to stand taller than the roof of a Range Rover. That’s not something I ever thought I would say, and I’m not a man that’s been blessed with height.