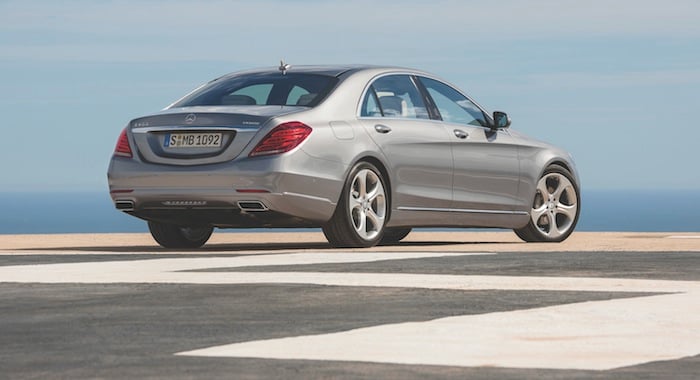 The Mercedes-Benz S-Class has been the self-proclaimed ‘world’s best luxury saloon’ for a few decades now. While I’m sure Rolls-Royce, Bentley and one or two others would like to argue the point, it has always been among the very best.

A new release of the German flagship is a rarity as the S-Class has one of the longest production lives in the automotive world. When a new model comes along, it therefore invariably has several features that are worth talking about.

While its styling is subtle on the outside, there is pure opulence on the inside, which is a nice break from tradition with German cars of recent years that have gone down the minimalist path.

Open the door to the S-Class and you are greeted with an interior that’s both modern and elegant with timber veneer pressed into soft touch, quilted and perforated leather on all surfaces, including the dash, and shiny alloy speakers which dot their own intricate laser patterns.

However, it’s at night where the S-Class interior really turns on a show. At the touch of a button, seven shades of mood lighting are available though the 300 LEDs dotted around the cabin from vivid electric blue, through to soothing creams and daylight whites to shocking bright reds.

Then there’s the Burmester stereo that features a big metal speaker mounted in the ceiling between the dual-sunroofs, matching smaller door-speakers that pop-out and rotate when activated. The innovative Frontbass system boasts of woofers mounted in the firewall while utilising the almost 40 litres of space in the cross-member and side member as a resonance chamber, making conventional woofers in the doors unnecessary and freeing up door pocket space.

The streak of luxury continues when you notice the seat massage button and go through the menus. How do six different types of back massage, two of which consist of a hot stone massage for the spine, sound?

Developed in conjunction with physiotherapists and psychologists, the system uses 14 separately actuated air chambers in the backrest and an integrated warming function to deliver a wide spread of massage options on the go.

Luxury is subjective. On first sight, I feared that the new S-Class may have lost out to its competitors from Europe, the US and Japan. But it wasn’t until I spent time behind the wheel that I found it to be a worthy candidate to carry the S-Class nameplate.

The S-Class has always marked the height of innovation and this car is no different. One example is that it’s the first car to no longer use light bulbs. A century after the introduction of electric lighting, the 2014 S-Class Mercedes changes the rules by fitting 56 LEDs in the headlamps and 35 LEDs in the tail lamps as well as those 300 inside.

Apart from providing genuine daylight colour temperature, the LED headlamps save a claimed 0.05 litres of fuel per 100kms from the reduced wattage needed.

Power for the S400 tested comes from a turbocharged 3-litre V6 that won’t set the world on fire with its acceleration but cruises comfortably at highway speeds and will fight for supremacy as the top- selling model in the region alongside the more powerful 4.7-litre, V8-powered S500 variant.

From the outside, the new S-Class is very much the businessman’s express, not giving too much away with its svelte lines that are so understated, almost underwhelming.

The radiator grille is now larger, upright and distinctly three-dimensional in design. With its long bonnet, the flowing, domed roofline and the gently slanting rear end, the new S-Class has classic saloon proportions and while it stands out against its immediate German competitors from BMW and Audi, it has a more subtle look than the model it replaces.

Spot one in traffic and it doesn’t shout over-the-top opulence, but rather, utters a polite ‘excuse me’ as it glides up to the valet reception.