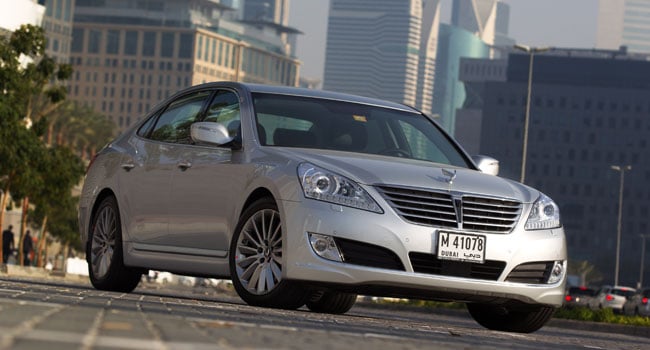 You can’t accuse Hyundai of lacking ambition. According to the press pack “The current generation Centennial was launched in 2009 as a genuine alternative to the traditional German and Japanese luxury models.”

In other words, Hyundai is going head-to-head with Audi, BMW, Mercedes, Lexus and Infinity. Not the bottom of the range, mind you. “The luxury sedan is benchmarked against many of the world’s top models primarily the Mercedes S-Class, BMW 7-Series, Audi A8 and Lexus LS 460.”

That is quite the challenge. Then again, people were sniggering when Toyota launched the Lexus in 1990, especially as it was a blatant Mercedes rip off. The Centennial avoids that trap as it doesn’t seem to have taken its design cues from any one particular brand, although the exterior does gently remind me of the Mercedes S class.

However, some aspects of the interior look like Hyundai raided the parts bins of other manufacturers.

The LCD instrument cluster evokes Jaguar, and it even changes to red when you engage Sport mode. The gear lever has been nicked from BMW, as has the driver interface that is similar to the iDrive system. The super comfy seats are pure Lexus, while the seven-inch screen in the centre console reminds me of Cadillac. There’s nothing wrong with learning from the best, but it does result in a bit of a personality crisis.

What makes a Hyundai a Hyundai? What differentiates the Centennial from its competitors?

The answer is price. The top-of-the-range 5.0-litre V8 is yours for Dhs280,000. No need to worry about extras, as the Centennial comes pretty much fully loaded. Also included is free maintenance for five years or 100,000 kilometres, as well as a five-year unlimited kilometre warranty.

Plus the 2014 Centennial comes with a guaranteed buy-back value for added peace of mind. Does all that sound too good to be true?

Actually, it isn’t. In the three days I had the Centennial I became quite fond of it. The Centennial might not have snob appeal, and I’m still trying to figure out what the hood ornament stands for. But that should not distract one from a car that pretty much does everything right.

The driving characteristics of the Centennial are more American than German.

The air suspension allows the Centennial to waft over the road in a Cadillac fashion, but that also compromises the handling. Corner tightly and there’s some body roll.

I preferred Sport mode as the handling improves significantly thanks to the firmer suspension. In my opinion the Centennial in Sport mode drives like a Mercedes in comfort mode.

The engine is smooth and growls nicely when pushed hard. Driven normally you can hear the engine is there, but it’s not intrusive. In fact, the sound insulation is pretty good on the Centennial. The eight-speed shift by wire automatic transmission is smooth and quick – no hunting for gears. The brakes match the engine’s performance with deceleration from 100km/h to 0 in 43.3 metres.

The Centennial was designed to provide maximum comfort for rear passengers, and it definitely succeeds in that department.

The seats are super comfortable and there’s enough legroom for me to stretch out my 1.8-metre-long body. Customers have the choice of three rear seats, or two rear seats either side of a rear centre console.

The console contains a cool box for refreshments, cupholders and a Driver Information System (DIS) that places a number of controls at the rear passengers’ fingertips, from changing the temperature to the position of their seat. For an added touch of opulence there are electric curtains for the side windows and rear screen.

Focusing on the needs of rear passengers does take something from the driving experience. The steering is a bit too light for my tastes and the drive lacks some feedback. Still, you feel more connected to the road than in some vehicles.

The Centennial excels at cruising on the open road, not at hairpin bends. Mind you, that can be said of all luxury limousines.

The Centennial has some way to go before it reaches the marque appeal of its competitors.

For example, the buttons feel too plastic and the finishing needs an extra dash of sophistication to get on par with its rivals.

But for its price the Centennial offers performance, comfort, luxury and all the technology to keep you safe and happy. That message appears to be spreading, as GCC Centennial sales jumped 147 per cent last year.