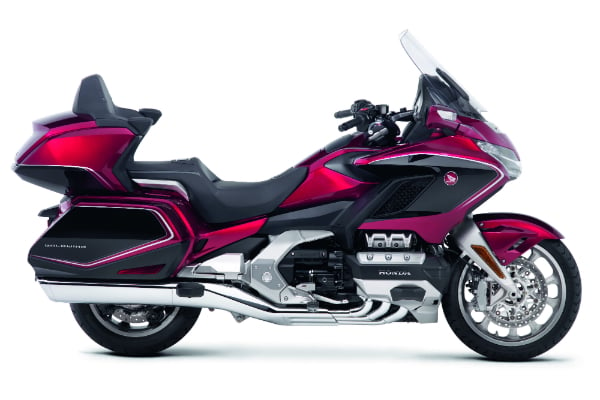 Performance and luxury are not mutually exclusive, and although the latest iteration of the Honda Gold Wing has shrunk in size, it still delivers both in perfect harmony.

It’s smaller. Yes, you heard it right. It’s smaller than its predecessor. But even being 90 pounds lighter, the 2018 Gold Wing is the model’s usual sharp and focused self, retaining all the traditional comfort and convenience that Honda’s flagship tourer is known for.

The first thing you notice is how slim the new edition looks when put next to the outgoing 2017 model. Gone is the muscular body of a WWE wrestler and in comes the finely chiselled physique of a martial arts master. It has kept the same flat-six engine configuration, but everything else has been radically changed. There are two versions to choose from – the Gold Wing Tour (full option with DCT) and the Gold Wing bagger edition, sans the rear trunk.

Our test ride was with the  Dhs134,900 2018 Gold Wing Tour DCT model with airbag in ‘candy ardent red’ and I was keen to find out whether the Wing could not only retain its ultimate touring title, but also if it could be used as an everyday workhorse for commuting.

Upfront, the Wing look stunning, with the wing-shaped array of 10 LED headlights and the beautifully placed multi-lens LEDs that don’t intrude in the rear trunk. The turn signals have an auto-cancel feature, but while riding I found they turn off early – well before I take the turn. At times I had to restart the signal as I reached for the turn.

The Gold Wing has a single smart-start button on the key, which brings the all-new 1833cc Unicam motor to life. The bike is fitted with Honda’s Dual Clutch Transmission (DCT), which has super rider control, seamless gear changes and a perfect gear ratio. Thanks to the seven-speed gearbox, I had all the power to accelerate when the lights turned green. The fuel-filler pocket in the front also has an accessible USB connection point to charge various gadgets such as smartphones, GoPros, Scalas, and the like: A big plus in my opinion.

Critical bike info such as fuel levels, distance travelled, and so on, is listed in a separate LCD screen that is easy to view even in daylight. Pairing my smartphone and my Cardo Scala Packtalk with the on-board communications system was a breeze, while Honda also wins points for managing to reduce the button clutter that littered previous models. Other electronic functions include cruise control which, thanks to ride-by-wire, can be managed more precisely – especially on my uphill climb of Jabel Hafeet and Al Jais.

The 2018 Wing also allows for electronic windshield adjustment. This meant I could change the height to match mine for better airflow over my head, while the pop-up vent channelled some air onto my face and body. 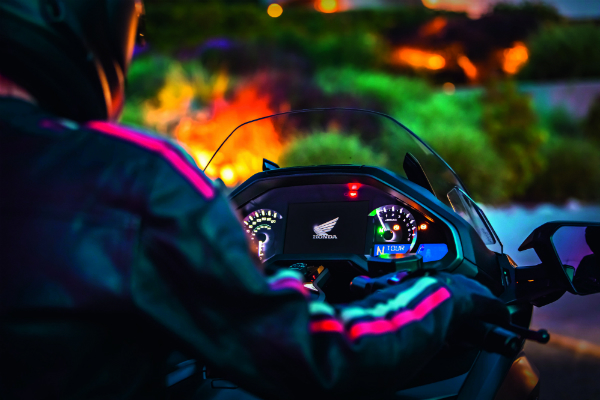 As this was my first ride on a DCT bike, it was bit awkward finding the gear pedal and clutch lever. But as I settled into a comfortable riding position it was actually much easier and more predictable than feathering the clutch as I’m traditionally used to doing. One can still use the manual gears on the DCT, but then what’s the point in buying a DCT version? Not only was it easy to negotiate the twisty and scenic mountain roads but also parking the Wing with the help of the walk mode was no problem despite the slopes.

There are four riding modes that affect the ride differently – tour being the default mode, alongside sport, eco and rain. On my daily commute to the office, I preferred the sport and eco mode. However, for longer weekend ides I shifted to the tour mode. My passenger found the seats to be very comfortable as her legs were less spread outwards. In the city, the slimmer frame also made it easier to squeeze between the cars on Sheikh Zayed Road and whizz past the usual traffic.

In the suspension department, the 2018 Wing is equipped with a double wishbone system front suspension, known for its superior performance, rigidness and reduced dive under braking. This is clearly visible through the handlebars, which remain completely insulated from the bouncing activity below. The suspension also comes with various pre-load settings, which can change the riding height, but one needs to come to a halt in order to change it.

With the overall change in size, the Wing’s saddlebags have also got smaller; down from 140 litres to 100 litres. To compensate, the Wing has a separate T-bar device that can lock two full-face helmets to the bike using their D-rings. This in turn leaves more space in the trunk for luggage. My fellow bikers considered it a sin to reduce the luggage space, but there was still plenty of space to pack for a three-day road trip.

Without even going into the technical details of the 2018 Gold Wing, my impression post-test ride is that Honda has managed to strike the ideal balance between comfort and performance.

Contrary to the perception of some riders, I found it to be a great tourer as well as a sturdy everyday bike. Meaning it should not only retain the loyalty of existing Wing riders, but also attract a new crop. 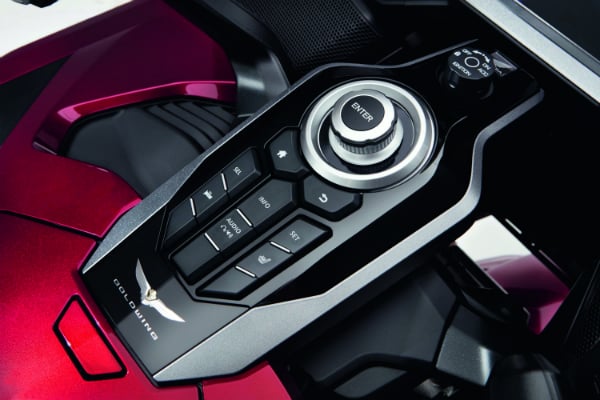