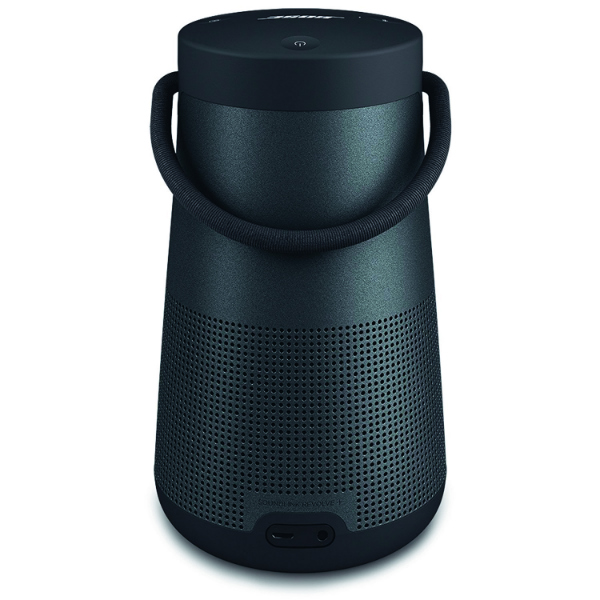 Portable speakers have become something of a standard corporate gift in recent years, with a brief scan through my drawers yielding something close to half a dozen miniature sound systems.

I was therefore curious to see what Bose thought it could accomplish in a market approaching commodity status.

The answer in the case of the Revolve+ turned out to be a pleasant surprise, although admittedly you would expect something special given the price tag of almost Dhs1,200.

After sliding the speaker out of the box the process of connecting via Bluetooth with my phone was simple enough, and there is also the even smoother option of NFC connection for devices that support it.

The design from the outset is sleek, practical and fairly minimalist and is perhaps best described as a sound lantern. The top – where the controls are – has a premium rubber texture and this is where you will find the handle for easy transportation.

As the name suggests, the Revolve+ is the larger of the manufacturer’s two speakers and the less portable, meaning it is not as easily thrown in a bag for a trip to the beach or elsewhere. Despite this, for use around the home the added handle means bringing it with you between rooms is simple and comfortable.

I tested the Revolve+ in several different scenarios – cooking in the kitchen, as background music in the living room and for an evening on the balcony – and was left generally impressed by the sound quality.

In comparison to your standard portable companion there is a noticeable difference in the oomph of the bass, clarity of lyrics and general sound range, meaning you will notice more of the intricacies of a song than on other systems.

Also worth mentioning is the volume and depth of sound, which thanks to the 360 degree design of the speaker managed to easily fill my living room when positioned centrally on a coffee table. It should prove an adequate companion for parties and other social occasions in a small to medium-sized room and may even cause noise complaints from neighbours if you aren’t careful.

You can also bring the Revolve+ with you to the pool and the beach without too much worry thanks to the water and shock resistant design, so long as you have don’t mind having to carry the extra bulk.

During my use the Revolve+ lasted more than a week of on and off listening before needing to be charged, and the manufacturer says it should be able to manage 16 hours of continuous music. Once it is out of juice the charging process is fairly simple via the included USB cable. Bose is also selling a charging cradle at an extra Dhs129 for an even more seamless experience.

However, it has to be said that this is adding to what is already a fairly expensive package and should have been included as standard.

Overall, the Revolve+ left me impressed with a significant jump in performance offered over any portable speaker I’d encountered previously. The handle makes it easy enough to take around the home and the added shock and water resistance means you don’t need to be afraid of putting it in harm’s way.

With this said, the sound quality does not match some wired systems and as someone who will often only bring out a portable speaker once a week – if that – it is somewhat difficult to justify the price tag.

Those using one more often, though, will find plenty to like here and with summer now upon us in the Gulf region it could prove a welcome companion for the long months spent indoors.

The SoundLink Revolve+ is available in black and grey for Dhs1,199