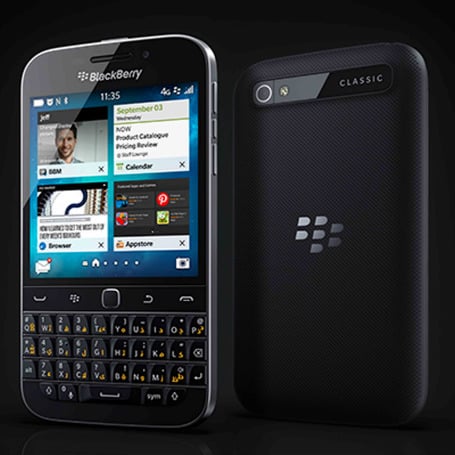 Not too long ago, BlackBerry came out with a phone that invoked equal amounts of ridicule and praise. That was the Passport – a phone with which the Canadian phone maker tried to leverage the ‘phablet’ wave sweeping mobile phone markets. Though numbers are still to arrive on how good or bad sales were for that model, BlackBerry has decided to invest into another trend that seems to be picking up steam – nostalgia.

The aptly named Classic is the latest device out of the struggling phone maker’s stables, but one that really harks back to the good times. On the face of it, it seems that this is a move to hold on to the faithful, or bring back those who defected to Apple, Samsung and the like.

The last time BlackBerry had a device like the Classic in its range was four years ago with the 9900, and similarly to that iteration, the phone maker at least has the design and form right down to a tee.

A mix of black and silver all over with a sprinkling of chrome across the keyboard gives the Classic the sort of ‘executive’ look that worked so well for the firm in the past.

The keyboard is a delight for sure, and represents BlackBerry a lot better than the terrible touch screen experience the firm has been putting us through in recent years.

Thanks to the rubberised but leather- looking back and the well spaced-out keyboard, typing messages or emails on the Classic is a breeze just as it was with past devices.

The device responded well to one- handed operation and you can be confident that it won’t slip out of your hands. Having said that, it’s not the lightest phone around and anyone moving from say an iPhone would have problems adjusting to the extra weight (177g).

On the looks front, I can safely say that BlackBerry loyalists will not be disappointed. However, if they are looking for something more contemporary on the ‘usage’ side, they may be disappointed.

For one, BlackBerry still suffers from a crippling shortage of apps. On the latest OS, you get access to BlackBerry’s own as well as Amazon’s app Stores. However, even these two are just not enough if you are a mobile, connected office worker. Some of the best productivity and workplace apps are still only available on iOS and to an extent, on Google Play. The game has changed and nostalgia can only do so much for sales.

Second, very clearly, the Classic is underpowered. While it is nifty enough to do the basic tasks like emails and messages smoothly, the 1.5GHz Snapdragon processor is just not built for modern day use of shuffling between apps, messages, emails and webpages.

Third, in my opinion, BlackBerry is complicating the user experience further with every new iteration of its OS. Apple’s iOS has not moved miles in how a user interacts with it in the last seven years but it still works. BlackBerry on the other hand seems to be jumbling up the interaction bit every time we are supposedly getting an upgrade. Are they mixing sophistication with complication?

That’s the bad news. The good news, if you are a loyalist still refusing to believe me, is that the battery life is excellent – you get more than a day of regular use on a single charge. As a journalist, I can’t emphasise enough my need for battery life and my disdain for battery packs.

Also good is the fact that you can upgrade the storage on the Classic all the way to 128GB. It is unlikely, however, that you will find enough apps or take enough pictures with the average camera to ever need that much storage.

So where does the Classic, that represents the best of times for BlackBerry, stand in today’s world? In the corner, on a shelf next to the school football trophies, where nostalgia looks best.