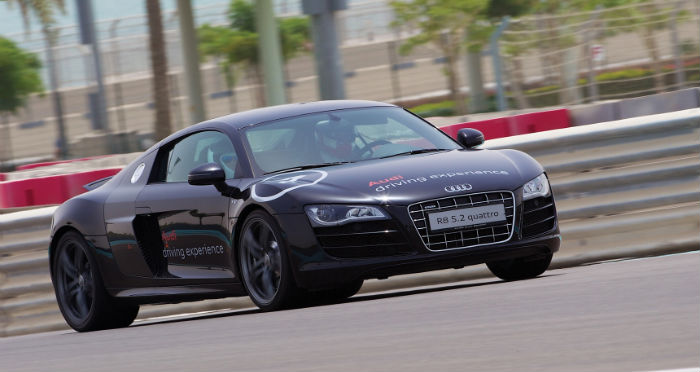 “Whoa, no, no, too fast!” came the alarmed voice over the walkie-talkie as I surveyed the five or six cones that had previously marked the edge of the racetrack, now splayed across the tarmac.

“You turned in too early, it’s a very late apex remember,” the instructor shouted through the window of the Audi R8, as he gathered up the plastic, innocent bystanders.

Ah yes, late apex, that’s where I went wrong. It was nothing to do with the 520 horsepower I was fiercely unleashing as I launched into the home straight of Dubai’s autodrome circuit.

This is the Audi R8 track day experience; a chance to drive one of the world’s top sports cars with instruction and coaching from a former professional racing car driver.

James Burnett, the instructor in question and the race school manager at Dubai autodrome, starts you off with caution as you glide through a slalom of cones in a quieter part of the track.

Unless you drive a high-performance sports car on a regular basis, the sharp handling, acceleration and braking power of the R8 takes a little getting used to.

After mastering the slalom course with ever increasing speed and confidence, James led me and my fellow drivers through the final corner on the track, practicing the tricky last bend several times before a tea break and a chance to gather what we had learned.

There are two main reasons for doing a track day like Audis. One is the chance to drive a car max out on purpose-made racing asphalt. The smooth, contoured tarmac is usually preserved for professional drivers.

When you put both of these together, the result is an adrenaline pumping, eyes-on-storks experience.

Interestingly the R8 V10s used at Dubai autodrome are not altered for the track; they come with standard road car specifications and could have rolled off the production line alongside any of the R8s you see on the roads.

It speaks volumes for the quality of the car that it is pounded around the track time and again, remaining intact and yet would be versatile enough, as well as comfortable, to drive home in after.

As we resumed our positions in the pitlane, Burnett — whose professional experience and patient temperament make him a fantastic instructor — leads us out onto the track for a final time for our flying laps.

A system of marker cones showing us where we should break and turn into the corners instil a sense of confidence and belief as we roar around the circuit, hitting speeds of 230km/h down the straight before braking 150 metres out from the apex.

The poor little cones, they never saw me coming.