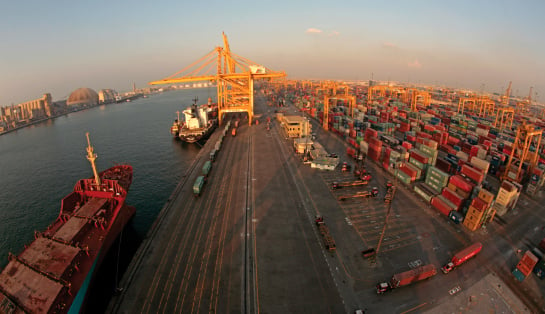 Dubai’s non-oil foreign trade values rose nearly 6 per cent to reach Dhs1.02 trillion during the first nine months of 2019, up from around Dhs966bn during the same period in 2018.

Foreign trade volumes also grew by 22 per cent to reach 83 million tonnes between January to September, compared to 68 million tonnes in the same period last year.

In terms of countries, China remained Dubai’s largest trading partner, contributing Dhs109bn, a 6 per cent year-on-year increase. India was the second biggest trading partner at Dhs100bn, up 16 per cent, followed by the US with Dhs57bn and Switzerland with Dhs47bn.

Saudi Arabia maintained its position as Dubai’s largest Arab trade partner. The country was its fifth-biggest partner globally with Dhs42bn worth of trade.

In terms of commodities, gold contributed Dhs129bn, up 17 per cent, followed by mobile phones which grew 7 percent to reach Dhs119bn. Trade in petroleum oils reached Dhs68bn while diamonds accounted for Dhs63bn.

“The strong performance of Dubai’s foreign trade reflects the robust fundamentals of our economy and prepares us to take advantage of the new opportunities that will come in 2020 – the year that will mark a new push for transformational growth over the next 50 years,” said Sheikh Hamdan bin Mohammed bin Rashid Al Maktoum, Crown Prince of Dubai and chairman of Dubai Executive Council.

“We are confident our external trade sector will continue its strong growth momentum. Government teams are going above and beyond to develop new initiatives that will fast-track our trade growth. These include the Dubai Silk Road project, which will enhance Dubai’s position as a leading trade and logistics hub.

“We are working on a virtual trade zone, the first of its kind in the world, which will considerably boost the development of e-commerce regionally and globally,” he added.

Dubai’s foreign trade out of free zones was a “big contributor” to the overall increase, accounting for Dhs439bn, a 11 per cent increase year-on-year, the statement said. Direct trade grew 2 per cent growth to reach Dhs574bn, while customs warehouse trade hit Dhs6bn.

Sultan bin Sulayem, DP World Group chairman and CEO and chairman of Ports, Customs and Free Zone Corporation said: “The strong growth delivered by non-oil foreign trade is a sign of how resilient the Dubai economy is. It also reflects Dubai’s success in developing its manufacturing facilities.

“Dubai trade is agile and it has strong access to new markets thanks to its reliability and transparency. This helps us with our upcoming projects that will be delivered in 2020 – the year of preparation for the next 50 years, based on an advanced infrastructure and the best AI applications which are expected to immensely change and disrupt the nature and structure of trade in the coming few decades.”