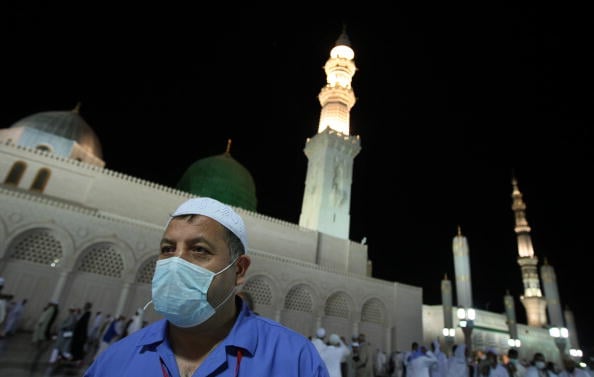 Saudi Arabia reported 10 confirmed new cases of a deadly respiratory disease during Islam’s fasting month of Ramadan, and subsequent Eid al-Fitr holiday, after fears that an influx of pilgrims over the period might spread the infection more widely.

Notices of any new confirmed cases are published at the end of every day by the Health Ministry. Ramadan ended a week ago and the Eid al-Fitr holiday ran until late last week.

Hundreds of people were infected by Middle East Respiratory Syndrome (MERS) in the Kingdom in April and May, raising concerns about the pilgrimage in Ramadan and during October’s Haj, when millions of people will travel to Mecca and Medina.

MERS, which is thought to originate in camels, causes coughing, fever and pneumonia in some and has killed around 40 per cent of people it has infected in the Kingdom.

Since 2012, when MERS was identified, Saudi Arabia has reported 298 deaths from the disease and 721 confirmed cases of infection.

This year and in 2013 there were outbreaks in April and May followed by a drop-off in new confirmed cases.

Of the people the Health Ministry confirmed were infected by MERS from the start of Ramadan on June 29 until the end of Eid al-Fitr, two were in Jeddah, the main arrival port for pilgrims and one was in the city of Taif near Mecca. Another MERS patient in Mecca, whose infection had already been confirmed, died of the disease.

The disease is thought to have an incubation period of around two weeks and testing by the authorities can take several days.

While all Muslims must try to make the annual Haj pilgrimage once in their lifetime, they are also encouraged to carry out the Umrah pilgrimage to Mecca and Medina which can happen at any time of year, but is particularly popular during Ramadan.

For a second consecutive year, the authorities have said they will restrict Haj visas in 2014 for safety reasons connected to construction work aimed at enlarging the Great Mosque at Mecca.

Saudi Arabia and the World Health Organisation have said they are imposing no travel or other restrictions due to MERS during the Haj, but have encouraged very young or old pilgrims, and those suffering from chronic disease, not to come this year.