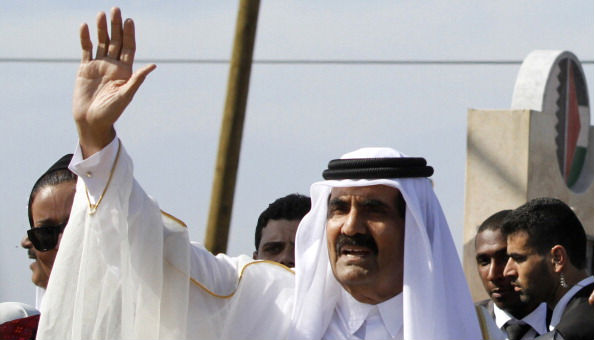 To his admirers, Qatari emir Sheikh Hamad bin Khalifa al-Thani is a champion of the common man’s struggle against tyranny, and a visionary who turned billions of dollars in energy revenues into strategic international investments.

To his critics, the 61-year-old ruler only pretends to be a friend of the masses, for while he backed Arab Spring revolts against autocracy, he clamped down on freedoms at home.

What both groups tend to agree on is that Sheikh Hamad has managed to turn the tiny Gulf state into a regional powerhouse that punches above its weight in international diplomacy and high-rolling finance.

His vision is expected to continue after he announced on Tuesday that he was stepping down and handing power to his son, Crown Prince Sheikh Tamim bin Hamad al-Thani.

The dramatic step is unheard of in a region where, until Arab Spring revolts two years ago, authoritarian rulers usually remained in power for life. The handover cements Qatar’s standing as “the great regional maverick”, said Kristian Ulrichsen, a Gulf expert at The Baker Institute for Public Policy.

The impetus behind Sheikh Hamad’s pursuit of the limelight for his country over the past decade, analysts say, was a wish to differentiate Qatar from regional neighbours, especially Sunni powerhouse and rival Saudi Arabia.

“He dexterously fostered a unique place for Qatar as a relatively neutral country in a volatile region,” said David Roberts, deputy director of the Royal United Services Institute in Doha.

“This not only improved his status domestically, but furthered Qatar economically by encouraging a modern, attractive and liberalising image.”

Under Hamad’s tenure, along with his influential wife Sheikha Mozah bint Nasser al-Missned, Qatar garnered much attention in the past decade through the launch of the Al Jazeera television network, as well as its successful bid to host the 2022 soccer World Cup.

But it was Qatar’s aggressive intervention in the Arab Spring revolts, especially supplying rebels in Libya with weapons to oust long-time ruler Muammar Gaddafi and pushing for Arab agreement on a no-fly zone, that really turned attention to the peninsula state of 1.9 million people.

Sheikh Hamad personally directed that billions be spent on supplying weapons as well as fuel and supplies to the Libyan rebels.

As one of the world’s richest countries with a cradle-to-grave welfare system for its 250,000 native population, Qatar has largely escaped the unrest seen in other Arab countries. It is perhaps that fact that has pushed Sheikh Hamad to throw his weight behind popular revolts abroad without worrying about any backlash at home.

He has also shored up Egypt’s Muslim Brotherhood which rose to power after Hosni Mubarak was deposed, depositing millions of dollars in Egypt’s central bank as the country struggled economically under the Islamist leadership of Mohamed Mursi.

A close U.S. ally that hosts a large American military base, its copious natural gas reserves have made Qatar one of the world’s richest countries.

The tiny country whose economy once centred on pearl fishing now has a sovereign wealth fund that controls an estimated $100 billion in assets. Its high-profile purchases, such as the acquisition of London department store Harrods, have highlighted the country’s immense wealth.

“It would not be a stretch to say that in some ways, Qatar today is more influential than Egypt on the regional stage, even though Egypt has more than 240 times the number of citizens,” said Shadi Hamid, director of research at Brookings Center Doha, the Qatar branch of the Washington-based think-tank.

That boldness helped Qatar cultivate remarkable success as a regional mediator. During Sheikh Hamad’s reign, Doha displayed an ability to engage almost everyone from the United States to Hezbollah, and even Iran.

The transformation of Qatar from a backwater into a global powerhouse began in June 1995 when Hamad, then aged 45, ousted his father in a bloodless coup.

“I am not happy with what has happened but it had to be done and I had to do it,” he said in brief televised speech at the time.

“God knows that I was not seeking power by this method for the love of power. It is rather a heavy responsibility and a great trust, and I beseech Almighty God to guide us.”

As Hamad handed over power to his son, the Qatari Twitter-sphere was awash with supportive tweets for the outgoing ruler, with a “thank you Hamad” hashtag quickly gaining popularity.

“Today is a new step in the history of the state of Qatar,” said one Twitter user.

“Don’t want media to analyse today, I just want them to witness the birth of an icon. Seldom do we come across this in MENA.”