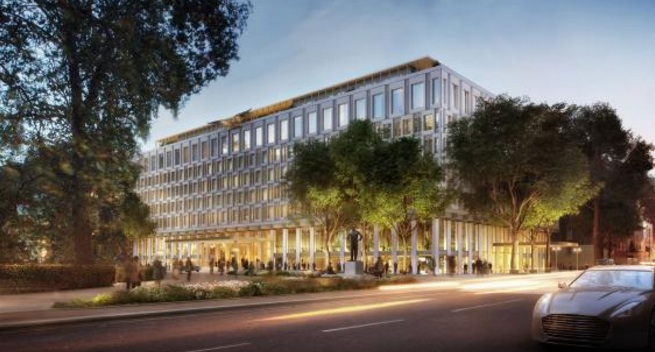 A Qatari real estate company plans to turn America’s embassy in London into a luxury hotel, as part of its latest developments across the city.

The embassy in Mayfair is set to be converted as part of a $1.4bn restoration of Grosvenor Square, according to London-based newspaper, the Evening Standard.

The property will be vacated next year when the ambassador and his team of diplomats move to a new home elsewhere in the city.

Reports suggest the building will be turned into a 137-bedroom five-star hotel with a spa, a ballroom for 1,00 guests, high-end shops and five restaurants. British architect Sir David Chipperfield is said to be drawing up the redevelopment plans.

Meanwhile, Qatari Diar is expanding its real estate portfolio by developing 2,818 properties at the Olympic site in Stratford – known as East Village – with Delancey, while APG and Delancey are developing 374 homes and 272 student housing units in Elephant and Castle.

In a statement, Qatari Diar’s chief development officer in Europe and the Americas, Sheikh Jassim Al Thani, said: “This merger between two leading London private rented-sector schemes is the first step in what is a much larger endeavour; to significantly increase the supply of new homes in connected and affordable locations in British cities.”

The homes – 1,500 of which are already built – will be operated under the Get Living London brand.

Qatari Diar is part of Qatar’s sovereign wealth fund which was founded by the emirate to strengthen its economy through diversification. The real estate company has stakes in French construction giant Vinci SA, utilities companies Suez Environment and Veolia, Port Tarraco Marina in Spain, and London sky scaler The Shard.