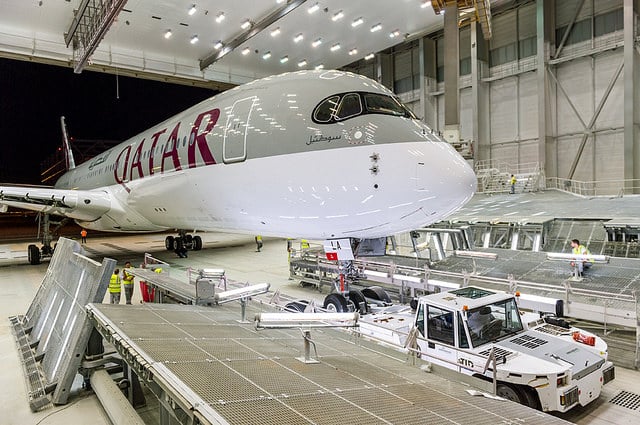 Europe’s Airbus has lifted a stumbling block to delivery of the world’s largest jetliner to Qatar but faces the growing prospect of delays for the first flight of its newest small jet, the A320neo, several people familiar with the matter said.

After a three-month dispute that had blocked the delivery of the first of ten A380 superjumbos ordered by Qatar Airways, the Gulf airline has agreed to take the new jet, they said.

Qatar Airways, which had refused to take delivery of the first three aircraft, citing concerns about the quality of the cabin interior, was not available for comment. In July, its chief executive said he would seek compensation for the delay.

Separately, industry sources said Airbus had been forced to hold off the first flight of the A320neo because of what one described as a “minor” technical issue.

A spokesman for Airbus declined to comment on whether there had been a delay, but said the company’s plan to fly the plane in the third quarter remained unchanged.

“Airbus and Pratt & Whitney are working together towards the first flight, and there is no change in plans to carry it out in the third quarter,” the Airbus spokesman said.

However, a person familiar with the matter said it now looked increasingly likely that the first flight would be pushed back to the fourth quarter.

“When flight testing starts is less important than having a successful flight test campaign,” the person said.

The A320neo, a revamped version of its best-selling A320 short- and medium-haul jet, is hugely important to Airbus after it sold more than 3,000, resulting in sharp increases in its share price. The airplane is due to enter service in 2015.

Airbus has not published a schedule, making it difficult to verify whether the timing has slipped within the official window. But the sources said the first flight had at one point been pencilled in for the first half of September.

Airbus plans a complex year-long flight test programme using eight aircraft spanning three versions of the A320neo family. Each version has a choice of two types of engine, so the planemaker must achieve safety certification for six types.

The amount of testing and data storage and analysis needed to certify modern aircraft has soared, from 12,000 parameters when the current version of A320 made its debut in 1987 to 670,000 parameters for the A350, which is nearing certification.

Most attention is on the performance of the engines after problems with a broadly similar Pratt & Whitney engine caused the temporary suspension of flight trials for the Bombardier CSeries, a new competitor to Airbus and Boeing jets.

The maiden A320neo flight and the first aircraft in service will use PW1100G-JM engines of Pratt & Whitney, part of the same family as those being tested for the CSeries. The companies involved have said the two engine types are different.

Two industry sources said there was speculation of a new glitch in testing, but the person familiar with the matter said Airbus and Pratt & Whitney were taking extra care to ensure they had completed their analysis of the tests carried out so far.

Asked about the reported delay, a Pratt & Whitney spokeswoman said by email: “We are working closely with Airbus as we prepare for first flight”.

With its gamble of revamping a successful cash-cow model riding on smooth flight tests, Airbus may be reluctant to start flying until it is certain the engine is performing smoothly, especially in light of the CSeries’ three-month grounding.

Although Airbus has massively outsold the delayed CSeries, the setbacks to the Canadian jet also mean there is less data available to their common engine maker than would have been the case if the CSeries had entered service on time in 2013.

The Pratt & Whitney-powered version of A320neo is due to enter service in the fourth quarter of 2015. Aircraft using engines from CFM, a joint venture of General Electric and France’s Safran, should enter service in mid-2016.

Speaking at the Reuters Aerospace and Defense Summit, Barry Eccleston, president and CEO of Airbus Americas, said he was not aware of any disruption and Airbus had been pleased with the main new feature of Pratt’s engine, a fuel-saving gear system.

Flightglobal, meanwhile, reported that CFM had rescheduled flight tests for two versions including one planned for the A320neo, but a CFM spokeswoman said there was nothing unusual about this and that certification would be unaffected.

In another key milestone, European safety authorities have said Airbus is on time to achieve certification for its newest wide-body jet, the A350, by the end of September.