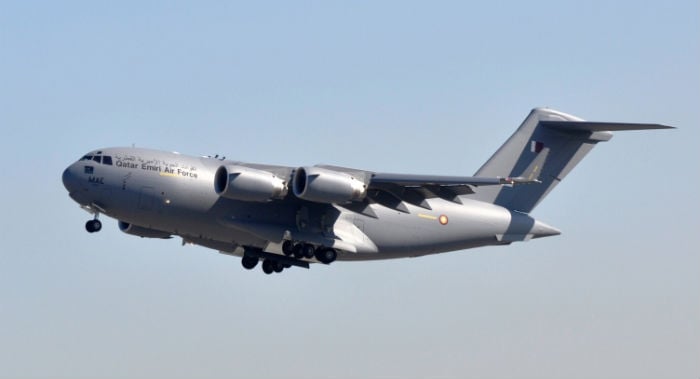 The Qatar Emiri Air Force has received its fourth C-17 Globemaster III from US-aircraft maker Boeing in Long Beach, California, it was announced in a statement on Tuesday.

Qatar, the first Middle East nation to order the C-17 airlifter, signed an agreement with Boeing in 2008 for two airlifters and associated equipment and services, with options for two additional aircraft.

The Gulf state received its first two C-17s in 2009 and the third airlifter earlier this year.

“The C-17’s reliability, along with its unique strategic and tactical capabilities, has expanded our reach and ability to support missions worldwide on a moment’s notice,” said Brig. Gen. Ahmed Al-Malki, head of Qatar’s airlift committee.

“Doubling our fleet strengthens our ability to support humanitarian, disaster-relief and peacekeeping missions.”

Earlier this year, Qatar’s C-17s supported the NATO-led operation in Libya and provided relief for drought victims in Kenya. In early 2010, QEAF C-17s delivered humanitarian aid to Haiti and Chile following earthquakes in those countries.

In June this year, Boeing delivered the last of six C-17s to the UAE Air Force as part of an agreement signed in 2010.