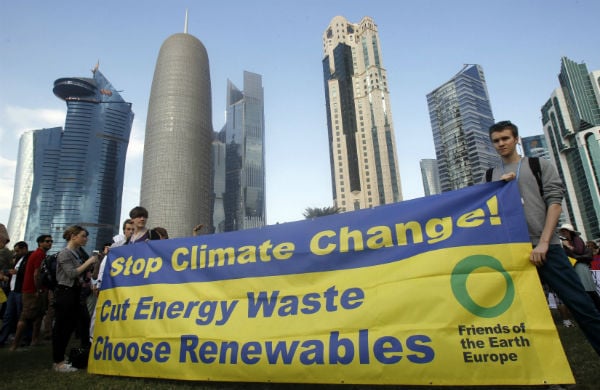 Qatar permitted a rare protest for workers’ rights on Saturday at a government-approved rally of about 300 activists demanding action to combat climate change.

Marchers, mostly foreigners attending the November 26 to December 7 talks among 200 nations on slowing global warming, chanted “Arab leaders, time to lead” and “climate action now” as they marched along the waterfront past skyscrapers in central Doha.

One group at the rally called for greater freedoms for migrant workers, who make up about 94 per cent of the workforce in Qatar, which is expecting a construction boom ahead of the 2022 World Cup soccer tournament it is to host.

Poor working conditions are common across the Gulf, where impoverished men and women from South Asia work on construction sites, oil projects and as domestic help.

“Migrant workers … have no rights, no voice right here in Qatar,” said Sharan Burrow, General Secretary of the International Trade Union Confederation, at the march.

“More workers will die building the stadiums than players will play on the field,” she said of the World Cup.

Non-Qataris are banned by law from joining a labour union, but Burrow said after meeting Acting Minister of Labour Nasser Abdullah al-Hemedi: “Qatar’s labour minister said that if we establish a union, he will personally ensure that any workers who join it are not punished. We will test him on that.”

Qatar does not publish figures for industrial deaths. Nepal’s embassy said 191 Nepalese workers died in Qatar in 2010, when the Indian embassy said 98 of its nationals died.

“There are measures currently being taken to improve the conditions of workers,” said Fahad Bin Mohammed al-Attiya, chairman of the Qatari organisers of the climate talks.

“It is a legitimate concern and one ought to work in addressing it seriously and swiftly,” he said at the rally.

Qatar, which has the world’s highest emissions per capita of greenhouse gases, allowed the protest to take place as part of a rally for tougher action to fight climate change staged during the international talks.

Tasneem Essop, of the WWF conservation group, who attended the march said she hoped the U.N. climate talks would “lay the seeds for a continued civil society movement” in Qatar, a U.S. ally which hosts an American military base.

The climate talks seek to agree an extension of the troubled Kyoto Protocol, the U.N. plan that obliges almost 40 developed nations to cut emissions by at least 5.2 per cent below 1990 levels between the years 2008-12.

Russia, Japan and Canada are pulling out, saying it is meaningless to extend the plan when big emerging nations led by China and India have no binding targets. That will leave a core group led by the European Union and Australia as Kyoto backers.

The United States never ratified the 1997 pact. Disputes over Kyoto are holding up other work towards a wider, global deal, meant to be worked out by 2015 and enter into force in 2020.