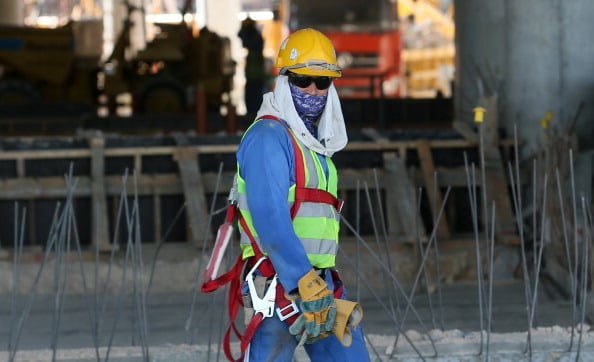 If the 2010 decision to award the 2022 FIFA World Cup to Qatar was greeted with surprise in some quarters, less surprising has been the subsequent focus on the country’s Kafala sponsorship system and its impact on migrant labourers now putting the needed infrastructure in place.

Kafala – used to monitor/regulate construction and domestic migrant labourers across portions of the Middle East, including Qatar – requires all unskilled laborers have an in-country sponsor. Usually, this is the employer, who is responsible for a worker’s visa and legal status.

Unsurprisingly, the system has come under increased scrutiny, with human rights groups, among others, claiming it creates easy opportunities for labourers to be exploited by their employers, including mental/physical abuse and the taking away of their passports, in some instances. These workers, often without insurance, end up effectively being trapped in limbo.

Compounding the problem, many workers have been recruited by unscrupulous agents in their home countries who have found them jobs paying significantly lower wages than promised. Many have also been saddled with debt due to fees needing to be paid to agencies back home.

In an attempt to address these issues, the Qatar government announced last May it would replace the Kafala system with employment agreements based on a model contract employers would be required to follow.

Other proposed measures included greater transparency and timelines of payments to employees via the electronic transfer of funds, improving accommodation and increasing the penalties levied on employers for confiscating workers’ travel documents from QAR10,000 to QAR50,000.

In addition, the Ministry of Interior would arbitrate disputes between employers and any employees seeking exit visas, while those on open-ended contracts would be allowed to switch jobs after five years.

Yet promises to institute these and other measures by 2015 have yet to bear fruit as disagreements among various factions within the government reportedly continue.

Given a report commissioned last year by the Qatar government from law firm DLA Piper stated 964 workers from Nepal, India and Bangladesh had died in 2012 and 2013 alone, the problem of migrant labour exploitation is hardly a new one – a point the Qatar government has largely conceded by acknowledging the findings.

Indeed, as long ago as 2013 the International Trade Union Confederation was warning that up to 4,000 lives were at risk before a ball is even kicked at the 2022 World Cup.

It noted that ‘current’ mortality figures for workers from Nepal and India – who alone account for the bulk of the (then) 1.2 million migrant workers in the country – showed that on average 400 workers die each year – a fatality rate likely to increase, unless addressed, with a reported 500,000 to a million additional workers required up until the tournament as the infrastructure is built.

In its November 2014 report: ‘No Extra Time: How Qatar is still failing on workers’ rights ahead of the World Cup’ human rights group Amnesty International hammered home this theme, claiming the Qatari authorities were still lagging severely behind when it came to dealing with migrant labourer issues.

The group said that the authorities had only made minimal progress since its May 2014 announcement.

As Sherif Elsayed-Ali, head of Refugee and Migrants’ Rights at Amnesty International put it: “Time is running out fast. It has been four years since Qatar won the bid to host the World Cup, putting itself in the global spotlight. So far, its response to migrant labour abuses has not been much more than promises of action and draft laws.

“Urgent action is needed to ensure we do not end up with a World Cup tournament that is built on forced labour and exploitation,” he says.

The report analysed the response of the authorities to nine key issues critical to the rights of migrant workers in Qatar. On five of them, it said, there had been no progress, whilst in the other four areas, progress had been only ‘limited’ or ‘partial’.

“Despite making repeated promises to clean up its act ahead of the World Cup, the government of Qatar still appears to be dragging its feet over some of the most fundamental changes needed, such as abolishing the exit permit and overhauling its abusive sponsorship system,” Sherif Elsayed-Ali adds.

As part of its recommendations for reforms, Amnesty called for a number of measures, including unambiguously abolishing the exit permit; launching an independent investigation into the causes of migrant workers’ deaths; dropping prohibitive fees for workers to raise court cases against employers; publishing the names of exploitative recruiters and employers; and granting domestic workers legal protection of labour rights afforded to other workers.

Despite the high profile condemnation of the Qatar government by Amnesty International, authorities have since bought a limited amount of political time, after the International Labour Organisation (ILO) postponed a decision (until November) to investigate the country on charges ofviolating the Forced Labour and Labour Inspection Conventions.

Sharan Burrow, International Trade Union Confederation (ITUC) general secretary, has been scathing, claiming Qatar has used its financial muscle over other governments to gain more time, after years of empty promises to bring its system of slave labour to an end.

“Worst of all, governments from Asia and Africa, where most of the 1.5 million migrant workers in Qatar come from, refused to stand up for their own people. A further six-month delay will cost scores of lives as workers are forced to work through the incredibly hot summer months without basic protection and at the mercy of Kafala employers,” says Burrow.

The sub-text to all of this is the increased likelihood of Qatar being able to defeat any move to strip it of the right to host the 2022 World Cup at the upcoming FIFA congress – the assumption being Asian, African and Latin American FIFA members will oppose moves by Western football federations to significantly increase pressure on Qatar to reform its controversial sponsorship system.

It also undercuts a warning in March – issued by FIFA president Sepp Blatter after talks with Qatar’s Emir Sheikh Tamim bin Hamad bin Khalifa Al Thani – that more needed to be done to improve the working conditions of migrant labourers. Although cynics argue that Blatter’s comments were nothing more than self- serving sound bites to improve his public image and demonstrate FIFA’s ‘sensitivity’ to the migrant labour issue.

They also contend that Blatter’s comments were intended to fend off growing criticism within FIFA that was very publicly aired after outgoing FIFA executive committee member, Theo Zwanziger, issued a call to strip Qatar of its hosting rights, warning that the next FIFA congress could see a motion tabled by member associations to replace Qatar with another host country.

Zwanziger’s successor on the executive committee, German Football Association president, Wolfgang Niersbach, has already gone on record as saying Qatar is too small a country to stage the World Cup and has previously expressed concern/irritation about the impact of a winter World Cup on domestic European football leagues.

Despite the widespread criticism regarding worker protection, the Qatar government counters it has already instituted a number of measures. Its Supreme Committee for Delivery & Legacy, tasked with delivering proposed tournament venues and projects for the World Cup, released a Workers Charter back in 2013 that would require all potential contractors and sub-contractors to ensure delivery of their projects will comply with principles, as well as relevant Qatari laws.

More importantly: “All workers engaged on its projects, and those working on other infrastructure projects in Qatar, have the right to be treated in a manner that ensures their well-being, safety, security and dignity at all times.”

It adds: “We have developed a robust set of Workers’ Welfare Standards, which are incorporated into all of our contracts. These standards – which are aligned with Qatari law and international best practice – set clear guidelines that protect the rights of workers throughout the entire chain of contracting, from recruitment to repatriation.”

Yet, in the absence of firm action so far, criticism by the likes of Amnesty International, the ITUC and even the UN, where a number of the more than 80 countries speaking last year at
the UN Human Rights Council panel reviewing Qatar’s human rights record, expressed concerns, has failed to see comprehensive reform.

And with the ILO effectively having given the Qatar government a six-month pass to institute significant changes, the prospects of a swift root and branch resolution of this long festering issue are not good, in the short term at least.