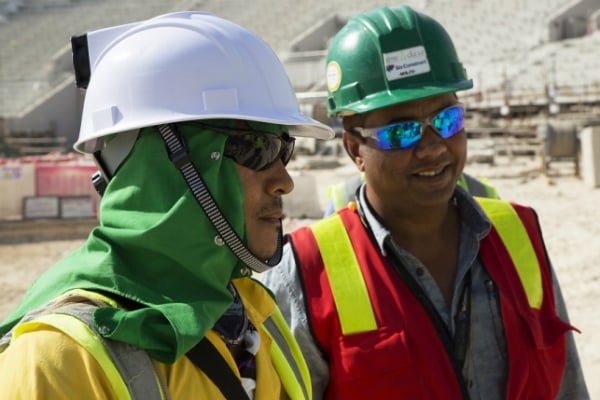 Qatar’s 2022 World Cup Supreme Committee for Delivery and Legacy has said it plans to introduce a new solar powered cooling helmet for workers on its projects during the summer months when temperatures reach 50C.

In a release, the organisation said the helmet, which has been developed by researchers at Qatar University over the last two years, has the potential to reduce the skin temperature of construction workers by up to 10 degrees centigrade and reduce heat stroke.

The units are now in the production stage after advanced testing and patenting by a group of Doha-based scientists in cooperation with the committee and Aspire Zone Foundation.

“This type of body-based cooling technology has been used before in US sports for training purposes in hot states, but we have now developed this innovative solution for the construction sector and we believe it has the potential to revolutionise the construction industry in hotter areas of the world,” said Dr Saud Abdul-Aziz Abdul-Ghani, professor at the College of Engineering at Qatar University.

The announcement comes as the country continues to face pressure regarding the treatment of migrant workers on its world cup sites after allegations in 2015 that up to 1,200 workers had died on the job.

A report from rights organisation Amnesty International in March said migrants building the 2022 world cup stadiums still faced abuse through illegal recruitment fees, poor housing and the confiscation of their passports by employers.

The country also officially introduced reforms to its controversial kafala labour system for foreign workers last week but many rights group said they did not go far enough.

“It is good that Qatar has accepted that its laws were fuelling abuse, but these inadequate changes will continue to leave workers at the mercy of exploitative bosses,” said James Lynch, deputy director for global issues at Amnesty International.

The helmet project will likely be seen as another means of improving the perception of Qatar’s treatment of migrant workers.

Explaining the concept, Professor Abdul-Ghani said it uses a solar-powered fan to blow air over a cooled material at the top of the helmet. 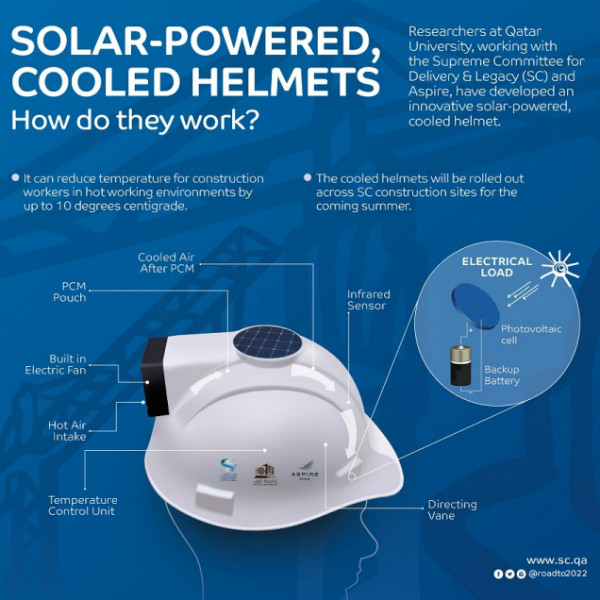 This will then come down over the front of the person’s face and provide a cooler micro-climate for the worker, he said.

“We are confident that this technology will create more comfortable and safer working conditions, and there is just a minimal increase in weight to the helmet. By reducing the temperature of the head and face, the rest of the body will naturally follow and ensure that workers have a constant flow of cooler air to refresh them throughout their day.”

The helmet can provide cooling in hot conditions for up to four hours straight, after which it is placed into a refrigerator.

It weighs roughly 300g and is claimed to cost just $20 more than a traditional hard hat.

It was unclear whether the country would pay for a hat for each of the 5,000 workers currently building the stadiums or the total of 36,000 expected within the next two years.

Engineer Hilal Jeham Al Kuwari, SC Chairman – Technical Delivery Office said the technology would be first used on the World Cup sites but could extend to other parts of the world with hot climates.

Mass production could see it used in the Middle East, Asia, Australia, Mexico and the US, professor Abdul-Ghani added.