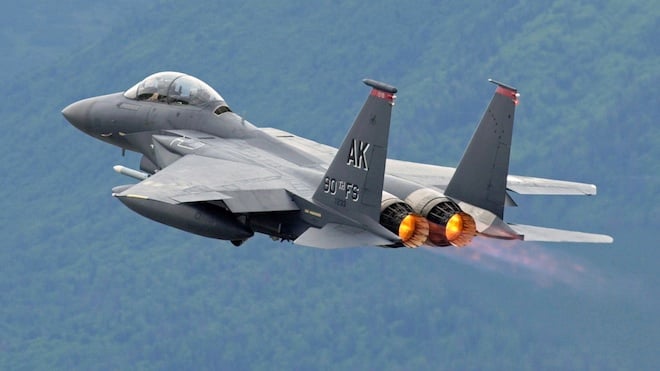 Qatar has gone ahead with plans to buy 36 F-15 jets from the United States despite rhetoric from US President Donald Trump backing the country’s Gulf rivals in its current diplomatic dispute.

Bloomberg reports that the $12bn deal was signed by Qatari defence minister Khalid Al-Attiyah and his US counterpart, Jim Mattis in Washington on Wednesday.

The sale “will give Qatar a state of the art capability and increase security cooperation and interoperability between the United States and Qatar,” the Defense Department said in a statement, according to the publication.

The US Congress previously approved a sale of as many as 72 F-15s to Qatar in a deal valued at $15bn, long before the Gulf countries spat with its neighbours Saudi Arabia, the UAE and Bahrain.

Just a day before the deal was signed Saudi foreign minister Adel Al-Jubeir was in Washington where he insisted there was no blockade on Qatar despite the three countries closing land, sea and air links to it.

Read: Saudi foreign minister insists there is “no blockade” on Qatar

When the diplomatic rift began last week Trump wrote on Twitter that his recent trip to the Middle East was already paying off, suggesting backing for Saudi Arabia in the dispute.

“So good to see the Saudi Arabia visit with the King and 50 countries already paying off. They said they would take a hard line on funding extremism, and all reference was pointing to Qatar. Perhaps this will be the beginning of the end to the horror of terrorism!” Trump wrote on Twitter.

Separately US diplomats and secretary of state Rex Tillerson have taken a more balanced approach given the complexities of the dispute and Qata’rs hosting of a US base that is key to its efforts against ISIL and home to some 10,000 troops.

Tillerson on Friday even called for Saudi Arabia to ease restrictions on Qatar before Trump backed the kingdom for the blockade hours laters.

Qatar’s Defence Ministry said the F-15 deal would create 60,000 jobs in the US and lead to closer strategic collaboration in the fights against violent extremism.