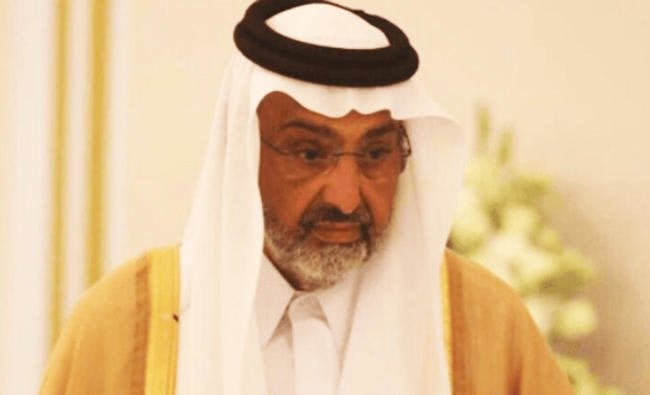 Qatar has frozen all the assets of Sheikh Abdullah bin Ali Al Thani, a member of the Qatari ruling family, who recently criticised the actions being taken by the Qatari government, according to reports in Saudi dailies.
official news agency WAM quoted Saudi newspapers as reported on Sunday.

In a message on Twitter, Sheikh Abdullah said: “The Qatari regime honours me by freezing all of my bank accounts, and I thank them for this honour and I have the honour to present it to the homeland.

“I hope that Qatar will expel opportunists and friends of interests and return to the Gulf embrace,” Sheikh Abdullah was quoted as saying.

Saudi Arabia, the UAE, Bahrain and Egypt severed ties with Qatar on June 5 over its alleged support of terrorism – charges Doha denies.

Sheikh Abdullah has been calling on Qatari authorities to mend ties with the GCC states.

In August, he met with Saudi Crown Prince Mohammed bin Salman bin Abdulaziz to mediate on re-opening a land border to allow Qatari pilgrims to perform the annual haj pilgrimage to Makkah.

He has also met twice with Saudi King Salman.

In a strongly worded statement addressed to Qataris last month, Sheikh Abdullah said that the situation was getting worse.

“It has reached to a point of direct incitement against the stability of the Gulf, interference in others affairs, which pushes us to a destiny that we do not want, as what happened in countries that entered the adventure tunnel, and ended in chaos and destruction with scattered losses,” he said.

He urged people not to “keep silent in this crisis”, to discuss the situation, and take steps to “get everything back on track, and enforce the Gulf cooperation”.