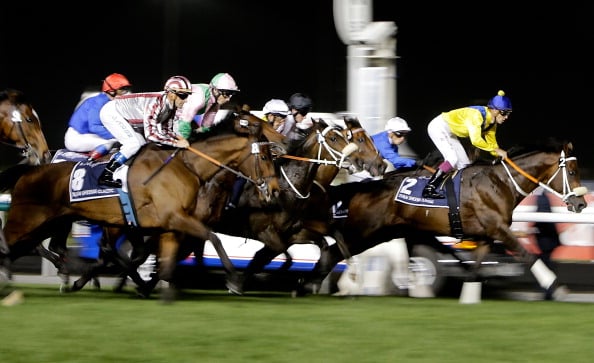 “It is very exciting. We managed to get it done as of this morning. The horse vetted so that the deal would take place in time so Sheikh Joaan could run in the World Cup,” racing advisor Harry Herbert told reporters in Dubai.

“This is a very rare occasion to get something done very very late on,” he said after the post position draw for the world’s richest race, declining to reveal the price.

“The son of Galileo will run in the colours of Al Shaqab Racing in partnership with the Coolmore triumvirate of (Michael)Tabor/(Derrick) Smith/(John) Magnier,” the stud said on its website www.coolmore.com.

“He will remain in training with Aidan O’Brien at Ballydoyle and will continue to be ridden by Joseph O’Brien,” it said.

The four-year colt last ran in the 10 furlong (2,000 metres) Champion Stakes at Ascot in October when he finished third.

“We very much looked into that he will hopefully potentially improve with age so he ticks an awful lot of boxes,” said Herbert, hired by Sheikh Joaan late last year.

“These are the horses that obviously…we want to be racing not just for the fantastic prestige to run a great race like the race on Saturday but also when the horse finishes and retires to stud you have a very significant investment in a horse that won the Derby and has a beautiful pedigree by Galileo,” he said.

In a similar fashion, his racing operation acquired another World Cup-ready runner, Planteur, shortly before the 2,000 metre contest last year, when he repeated his third place from 2012.

And last month, Sheikh Joaan bought British-bred Dubday just ahead of the Emir’s Trophy in Doha, snatching the prized home victory. Dubday will compete in his owner’s maroon silks in $6 million Dubai Sheema Classic on Saturday.

On a quest to build his racing empire, Sheikh Joaan bid a record 5.25 million pounds ($8.7 million) in an auction last October for a one-year-old daughter of Galileo, the world’s most sought-after stallion. Galileo also sired Frankel, who claimed a perfect winning record in 14 races.

Ruler Of The World will start wide among 16 runners on Saturday that include last year’s runner-up Red Cadeaux, picking the gate 12 in Wednesday’s post position draw at Dubai’s opulent Meydan racecourse.

“I might have taken a couple of free places inside of where we were but Joseph O’Brien is a wonderful jockey so I’m sure that even with the draw on the outside it still would not be the end of the world,” Herbert said.

“It is not the best draw but I do not think it is a disastrous draw,” he added.